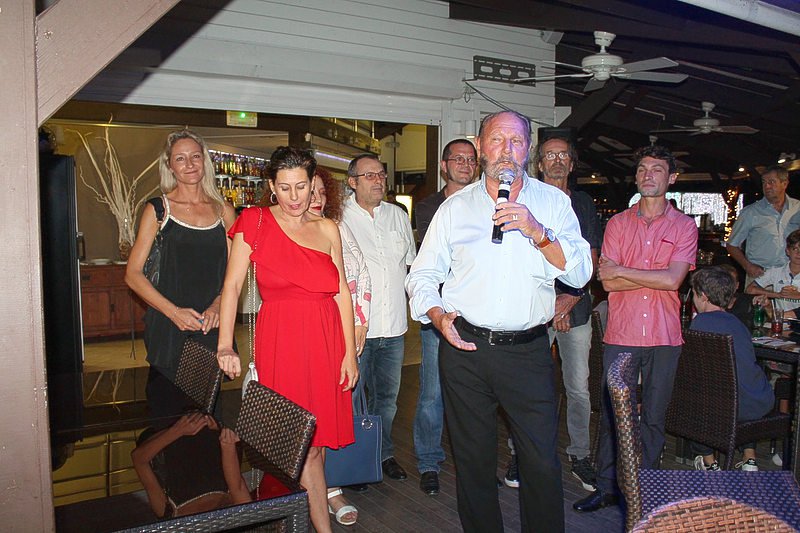 MARIGOT–St. Martin Week, the French side’s most recognisable and enduring free newspaper was officially re-launched under new ownership Friday evening at a cocktail party in the Fort Louis Yacht Club.

The 35-year-old newspaper has been taken over by new owner Jean-Paul Fischer, the former Director General of Semsamar, from previous owner Jean-Michel Peyrefiche.

The newspaper had been dogged by financial problems in its final days, having to lay off staff, before it was rescued by Fischer.

“I simply could not let such a well-known and popular institution just fade away into obscurity,” Fischer told a gathering of many well-known personalities, business persons and advertisers. “I would like to thank all those who supported us without whom there would be no newspaper.”

Fischer said he wanted the newspaper to be a link between communities, the business community, and associations.

Editor Igor Rembotte indicated aside from reporting news items, the newspaper will focus on opinion pieces.

“The first three months of 2017 is going to be an important time for us because it is election time and we will be reporting on the candidates and their programmes and campaigns,” he said. “We will be analysing those programmes and holding candidates accountable according to their promises.”

The first re-print of St. Martin Week was on November 25, 2016, following a period of inactivity.

For now the newspaper has a small team consisting of two journalists, a webmaster, and advertising and administrative staff.

“It is a small team right now but we have projects and plans to develop the newspaper,” added Igor. “We are going to have a brand new website and Google has accepted us as a bona fide newspaper. It took us three weeks to obtain that approval from Google which is incredible as it usually takes one year.”

No change to the format of St. Martin Week or its distribution is envisaged for now. The offices will remain at the present location on Rue Kennedy (behind Lipstick) in Marigot’s centre.