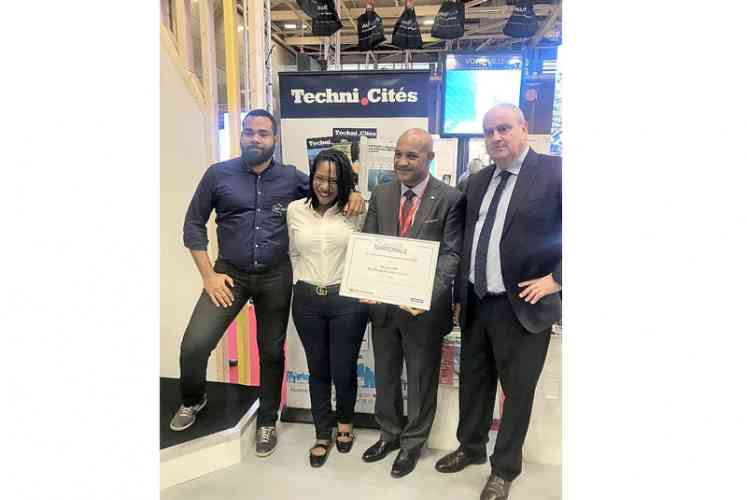 St. Martin received the Jury Prize for a technical project. Accepting the award were, from left: Martial Halley, Sabrina Placidoux, with President Daniel Gibbs and an unidentified individual at right.

President Daniel Gibbs took part in a climate change workshop in Paris at the same time.

The Salon des Maires et des Collectivités Locales is the only national event that brings together all the major players in public procurement. The event hosted the second edition of the Territorial Engineering Trophies, organised by Techni Cités and La Gazette des Communes. These Trophies are an opportunity to highlight technical innovations on the territories. They reward innovative local authorities whose original work contributes to improving the quality of public service.

Composed of technical experts, associations of elected officials and the editorial offices of Techni Cités and the Gazette des Communes, the Jury awards a prize to the most promising projects for the public service.

Present at the Congress of Mayors where he participated in the “Climate Change” workshop organised by the Association of Mayors of France, President Daniel Gibbs was able to attend the presentation of the prizes to the St. Martin winners.

The President praised the work of the two territorial executives, Placidoux and Halley, who made it possible for the Collectivité of St. Martin to be awarded the 2018 prize and who, through their professional involvement, proved in the context of reconstruction that the Collectivité is fully capable of bringing about profound and innovative changes for the benefit of its residents.

November 24, 2020
0
Claudius BuncamperPHILIPSBURG--The Prosecutor’s Office has requested permission from the Joint Court of Justice for the prosecution of current Member of Parliament (MP) Claudius “Toontje” Buncamper. The request was heard by the court during a closed-door session last week.  Prosecutor’s...
Read more

November 24, 2020
0
Claudius BuncamperPHILIPSBURG--The Prosecutor’s Office has requested permission from the Joint Court of Justice for the prosecution of current Member of Parliament (MP) Claudius “Toontje”...