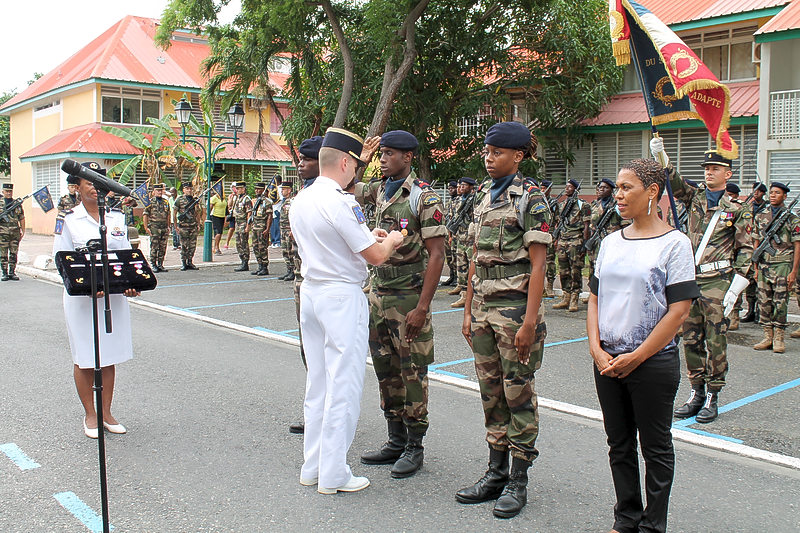 MARIGOT–Hotel de la Collectivité was the scene of a military flag ceremony on Thursday morning as Guadeloupe-based Régiment du Service Militaire Adapté (RSMA) presented its recruits to the flag of the regiment, the first time the formal monthly ceremony has been held in St. Martin.

The ceremony marks the end of four weeks of predominantly military training and start of professional training to prepare recruits for the job market in St. Martin, Guadeloupe or mainland France, starting Monday.

RSMA is a valuable ally to the Collectivité, providing job training in a military setting under the programme “Objective 100,” a convention signed in October 2014 between the Collectivité and RSMA to guarantee a minimum 100 places are available to St. Martiners in the insertion programme each year.
About eight to 10 young people from St. Martin join RSMA each month. The programme offers some 30 training courses in 10 professional domains of the trades sector.
The May induction comprised 80 new recruits, five of whom are from St. Martin.
The ceremony was presided over by RSMA Guadeloupe Commandant Colonel Yann Le Balc’h, Director of Training and Recruitment Commandant Gérôme Merceron and RSMA superior officer Capitaine Gérôme Allain.
The ceremony was observed by President Aline Hanson, Vice-Presidents and other members of the Territorial Council, and the Préfecture’s Chef de Cabinet Emmanuel Effantin representing Préfète Anne Laubies. 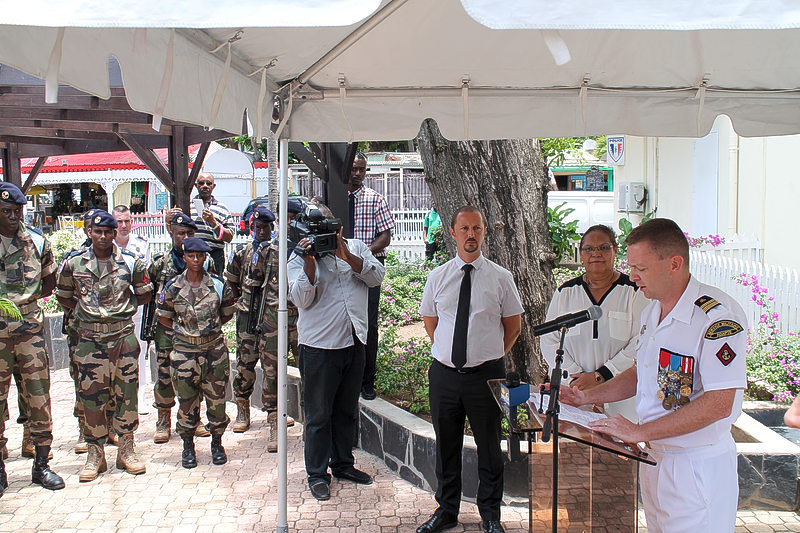 Representatives of Gendarmerie, Police aux Frontières, Police Territorial and war veterans were also present.
Three older St. Martin recruits – David Converti, Emma Guercin, and Yürgen Laguerre – who finished their RSMA training but stayed on after a year for more military experience were awarded the National Defence Bronze Medal.
Colonel Le Balc’h said the RSMA was “particularly happy with their performance” that went beyond the normal call of duty.
Accueil, Information et Orientation (AIO) dedicated Chef du Service Corine Pineau, who organises the recruiting sessions and informs and advises the youth on RSMA training programmes, also was presented with the National Defence Bronze Medal for her work.
The five new recruits joining RSMA this month are Ulice Jean, Fleurime Chino, Aaron Glasgow, Alexis Kenderson and Boniface Iniacio.
President Hanson, Colonel Le Balc’h and Chef de Cabinet Effantin each gave a speech.
Hanson said RSMA represents hope for young St. Martiners and their families, noting it is an “indispensable” partner. Some 98 young people trained in the RSMA programmes in 2015.
“Forty per cent of St. Martiners are under 20 years old and many are without activity, training or employment and that’s why since 2013 we have made the youth our priority,” Hanson said. Still, she added, 288 young persons are following programmes with the Collectivité’s training partners.
Hanson said she would like to see more professional integration opportunities available in the Antilles in general for young people who have RSMA diplomas. She called on local businesses again to give young St. Martiners priority when hiring.

Colonel Le Balc’h said in his remarks, “It was important for us to come to St. Martin for this flag ceremony to mark our attachment to St. Martin and for civic and patriotic reasons. I know the population here is eager to take part in patriotic ceremonies.”
Gifts were exchanged at the end of the ceremony.