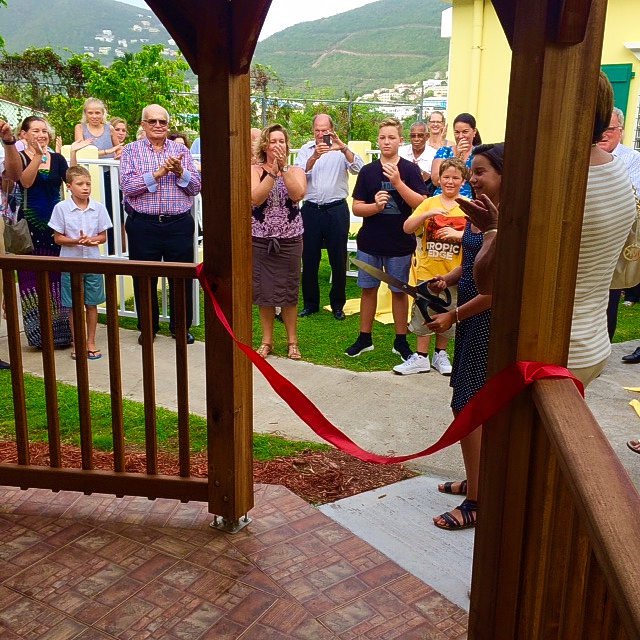 ST. JOHN’S–A garden gazebo was festively opened at the St. Martin’s Home on St. John’s Estate Road on Tuesday. The gazebo was built in honour and remembrance of Frans Mulder, who served as a board member of White Yellow Cross Foundation for more than 44 years.

Mulder served as president of the board for 35 years, from 1971 until 2006. During those years, he ensured that the Foundation’s clients received high-quality care and that opportunities were seized to develop the Foundation further.

The new St. Martin’s Home was built a year later and its clients moved there on November 30, 2002. With additional space available, further expansions were made possible. The new day-care was built for Sister Basilia Centre clients, enabling them to move from South Reward to St. John’s on June 28, 2012.

On the second floor of that new building, a day-care was opened on October 1, 2015, to serve elderly clients who live at home and suffer from dementia or a disorder that requires a therapeutic day-care environment.

Wheelchair tennis athlete Esther Vergeer opened the first and only physical rehabilitation centre in St. Maarten that same year, on December 1. This centre was built as an extension to St. Martin’s Home, offering quality rehab services to clients to regain their independence after an accident or illness.

After Mulder stepped down as president, he continued to serve as a board member, enabling the new president and other members to make use of his vast knowledge and skills.

Mulder was an active member, never missing any of the weekly meetings, greeting the clients as he came in. Enjoying life, he never missed a party and would socialise, dance and mingle with the clients and the Foundation’s employees. His friendly and open attitude combined with his lively laughter made him well-loved by all who met him.

Mulder was diagnosed with cancer in 2015 and, after a routine medical check-up and overseas travel to get treatment, he unfortunately passed away in Curaçao, on his way home to St. Maarten.

He had been a garden enthusiast and someone with a special place in his heart for the elderly, so his wife Irma Mulder-Beauperthuy requested donations instead of flowers. The response was overwhelming and resulted in the beautiful gazebo that is now enjoyed by the clients of the Nursing Home unit of St. Martin’s Home.