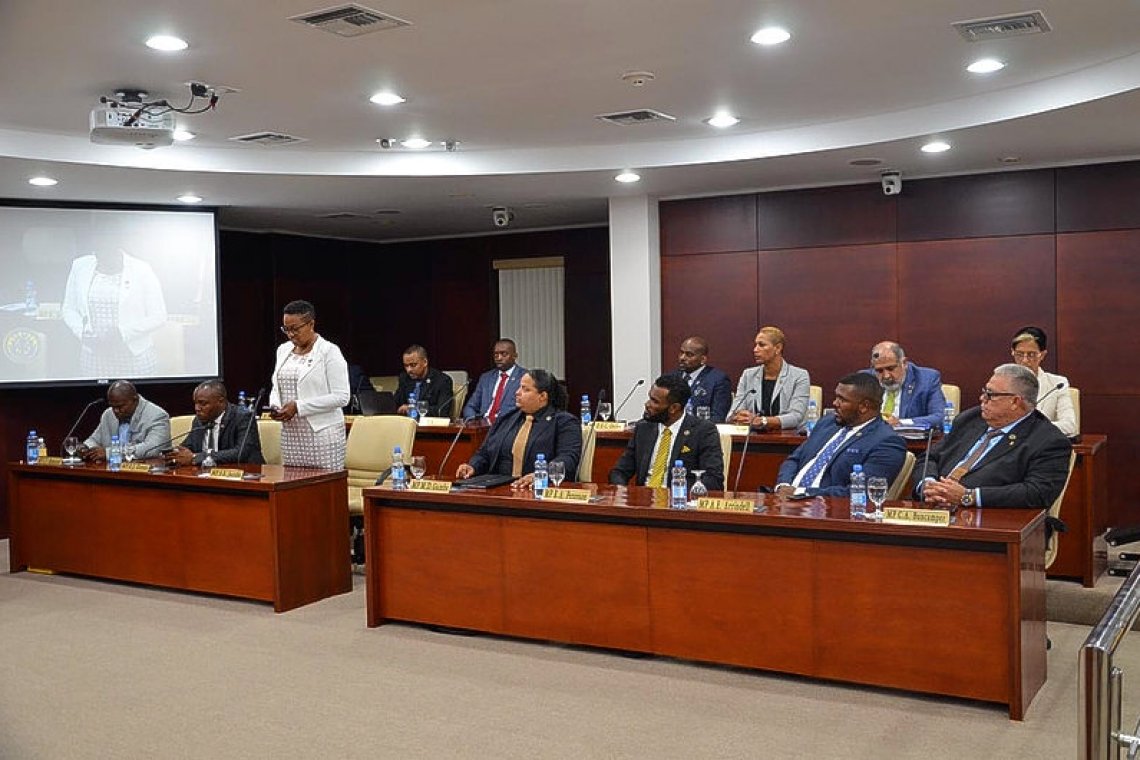 Members of Parliament during Monday’s first meeting of the new Parliament.

PHILIPSBURG–Stability, working together and putting the people of St. Maarten first were among the common messages shared by the recently-elected Members of Parliament (MPs), who participated in their first public meeting of Parliament shortly after being sworn in on Monday.

United People’s (UP) Party MP Sidharth “Cookie” Bijlani said this is the time to ensure that there is a stable government that will last for four years. The time is ripe, he added, to ensure that, as a team, the country goes up. Bijlani said that while in the past he had been very vocal in coalition meetings, he had not been so vocal in parliament. This will change, as Bijlani plans to be more vocal in championing the causes of the people on the floor of parliament.

United Democrats (UD) MP Sarah Wescot-Williams expressed hope that parliament sits for the entire four-year term from 2020 to 2024. She said the past few months had been a political rollercoaster in parliament and in government. She said she is heartened by some of the speeches she has heard and she wished everyone much success as legislators in their efforts to represent the people of St. Maarten.

UP MP Omar Ottley urged MPs to commit themselves to “be in this for the long haul” and regain the trust of the people of St. Maarten by keeping it together for four years. He said it is time to put the people of St. Maarten first. “Now is the time for change,” he said. “Now is the time to put our differences aside. Once we enter these doors the politics are over.” He said St. Maarten is now wiser and has weeded out the ship-jumpers by not re-electing them to office.

Party For Progress (PFP) MP Melissa Gumbs said she is looking forward to robust, respectful and actionable discussions in the new Parliament that set the tone that the time for playing politics for politics’ sake is coming to an end, and that St. Maarten is put on a path of sustainable progress that benefits everyone.

She stressed that forward progress of the county cannot be accomplished without cohesion, respect, ownership and accountability. On the issue of cohesion, she said this should not just be within individual factions but, when necessary, across those lines.

“While the path we chart in our minds may differ from time to time, the end goal in our hearts must surely be the same: to improve the quality of life for all in St. Maarten. It was echoed throughout the campaign that if initiatives that served the best interest of the country were brought forward, serious consideration should be given, regardless of the initiator. It is my sincerest hope that we put our vote where our mouth is, when that time comes.”

She said respect for one another, for the office that is being held and for all the people of St. Maarten is needed.

“It is nothing new for the political arena to be rough and tumble at times. … I would urge the individuals being appointed today to make it their priority to raise the bar on constructive discourse and, when in doubt, to recall the contents of article 50 of the Rules of Order and to remember that they have the right to admonish us if we lose ourselves and conduct ourselves as though we’re in impolite company,” she said.

On the matter of ownership and accountability, she said: “We very often hear that accountability is lacking at St. Maarten’s highest levels, but I believe that the root of the problem starts at ownership. Ownership is just the start of the journey; the initiatives we take, the decisions we make, and even the ones we do not.

“We must own the process and not allow ourselves to be distracted or detracted by internal or external forces. Accountability is our responsibility for the end result. Whether there is a success or a setback, we as Parliamentarians need to ensure that there is accountability to the people of St. Maarten for the end result of whatever action is taken.”

United St. Maarten Party (US Party) MP Claudius Buncamper said the campaign season is now over and the time has come to work for St. Maarten. He said that for him politics stops at the door and the House of Parliament is the place “to deal with the people’s business.”

Buncamper made clear that he will let his actions speak for themselves, as this will determine the person he is. Alluding to the issues he championed on the campaign train such as electoral reform, animal welfare and the legalisation of cannabis, Buncamper said he hopes to receive support from his colleagues to make these a reality.

UP MP Rolando Brison highlighted some areas that he believes should be enhanced, including parliamentary committees remaining active, and keeping government and holding ministers accountable to serve the people first. He said if UP believes that something is good for the people, it is willing to work along all party lines to ensure that it is achieved.

PFP MP Raeyhon Peterson said that despite differences of opinion, MPs must always remember to work together and set their differences aside, as this is what is needed to move St. Maarten forward. The time has come, he noted, for political maturity and to hold persons accountable for their actions.

“The time has come to bring back the principles of good governance regardless of who occupies the seats in executive branch,” he said adding that the old ways of politics where strings are being pulled in the background must come to an end.

National Alliance (NA) MP Silveria Jacobs said the people had spoken loud and clear and the message had been noted that parties should work together. She said the new parliament comprises a combination of experience, youth, persons of all races and genders and soon another group of young and dynamic politicians will be joining the ranks in the Council of Ministers.

“I pray for the stability of the country and I pray for all of us to put country above self and take goodwill decisions with the people in our minds and hearts,” Jacobs said.

Jacobs, who is also holding the fort as Prime Minister, said serving in both the executive and legislative branches for a short time would be tough, but both must hit the ground running. “We cannot allow any more time to pass where we are indecisive that would see the country go all the way back.”

NA MP Rodolphe Samuel said it is important to realise that in this stage in the life of St. Maarten, stability is key because without stability, the country will not be able to work on necessary issues such as health care, education, labour reform, laws that are in need of adjustment, etc. “It is only with stability that we can do the things that the people are asking us to do.” He extended a helping hand to new MPs, saying that he is willing to share his experiences and give advice if needed.

NA MP Egbert Jurendy Doran said there has been a major shift in politics in St. Maarten. He urged the newly elected MPs to always remain humble, not to get too comfortable and not to get carried away. “Remain true to what you say,” he said noting that it is one thing to love St. Maarten “with your mouth” and quite another to do it “with your actions.” He also urged his fellow legislators to keep pushing and keep striving for excellence.