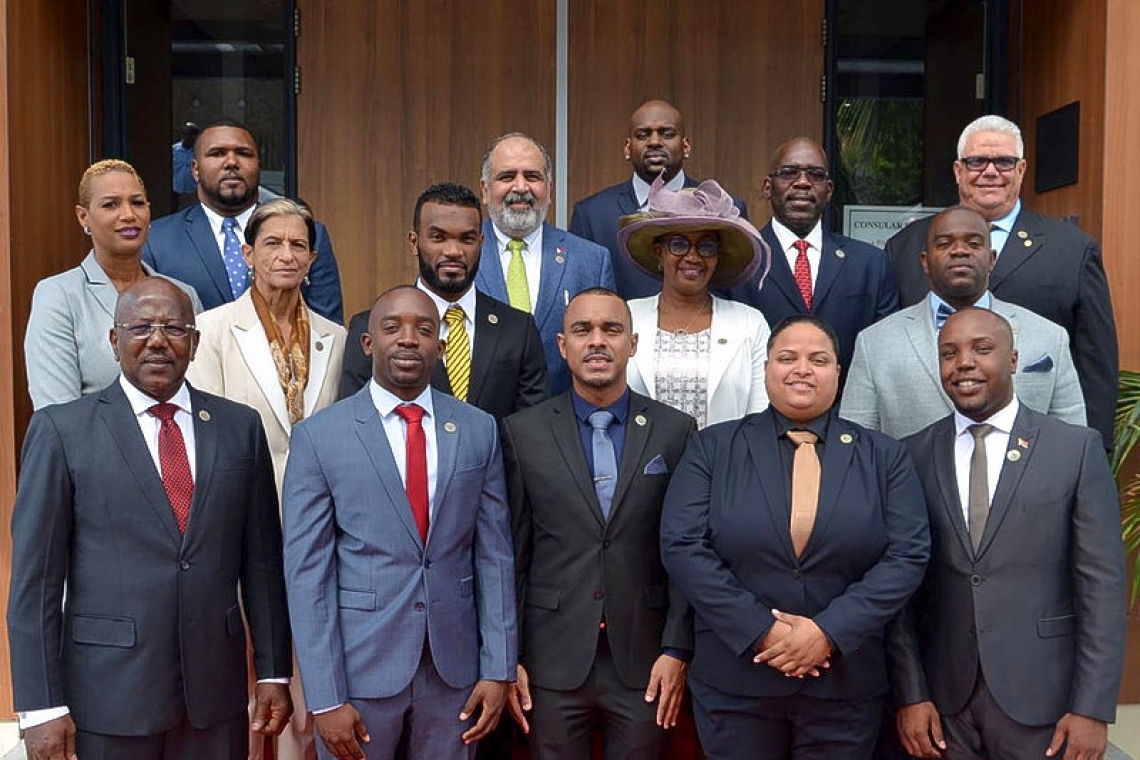 The 15 new MPs who were sworn in on Monday pose for a photo outside the cabinet of Governor Eugene Holiday.

HARBOUR VIEW–Governor Eugene Holiday on Monday urged the fifteen newly-sworn-in Members of Parliament (MPs) to “stand up for St. Maarten.”

The 15 elected representatives took their oath as MPs before Holiday and subsequently attended their first meeting of Parliament to appoint a Chairperson and Vice-Chairs of Parliament (see related story).

From Party for Progress (PFP) were leader Melissa Gumbs and Raeyhon Peterson and from United Democrats (UD) was leader Sarah Wescot-Williams.

Irion, Jacobs and Doran can hold the positions of MP and minister for up to three months under article 34 paragraph 4 of the Constitution.

Holiday sent a clear message to the new legislators before delivering their oath. “I advise or rather urge you, individually and collectively, to stand up for St. Maarten and approve the penal procedure code as your first order of business. Only you can do this. This is urgent and necessary to reduce the risk of being blacklisted by the FATF [Financial Action Task Force – Ed.]. Failure to act without further delay is not acceptable,” he said.

Holiday said the 15 elected officials were individually and collectively entrusted with the mandate to represent the people of St. Maarten for the next four years.

Article 56 of the constitution requires the elected representatives to take a solemn oath or make a solemn promise prior to accepting their function – a serious legal, personal and public matter.

This year will mark the 10th anniversary of St. Maarten attaining country status.

“Our country’s 10th anniversary is also an excellent moment to plan and set our country’s socio-economic agenda for the next 10 years and beyond. Standing at this 10-year mark in our country’s history, I therefore invite and advise you to reflect on the role of parliament in the past 10 years and to draw lessons for the future development of our country. To draw lessons, for – as the saying goes: “Those who fail to learn from history are condemned to repeat it,” Holiday said.

Lessons about the important role parliament plays or can play in securing political stability, promoting good and accountable governance and adopting legislation necessary for the effective governing of the country are lessons that Holiday hopes will guide the legislators in the fulfilment of their mandate to protect and improve the wellbeing of the people of St. Maarten above all else.

“During your tenure, as you seek to fulfil your mandate to protect and improve the wellbeing of the people of St. Maarten, you will face major and consequential choices and decisions. The choices you make will have far-reaching consequences for the lives of our people, of our children, our grandchildren and of all of us. Choices which will affect the preparation of our people for the challenges of climate change, technological advancements, ageing and globalisation.

“Your decisions on how to meet these challenges will, among others, affect our economic recovery, our children’s education, our jobs, our health care system, our pension system, our environment, our housing, our payment system and our public finances. One such choice currently before parliament is the handling of the penal procedural code as part of our international commitment to combat money-laundering and financing of terrorism,” he said.

He reminded MPs of the four aspects stipulated in their oath. The first is the solemn expression of their commitment to perform their function independently and with integrity. “That is that you have not accepted anything from or given anything to anyone in connection with your election as a Member of Parliament.”

Holiday expressed hope that the new MPs use their oath as a guide in the performance of their function to promote stable and effective governance towards the protection and improvement of the wellbeing of the people of St. Maarten.