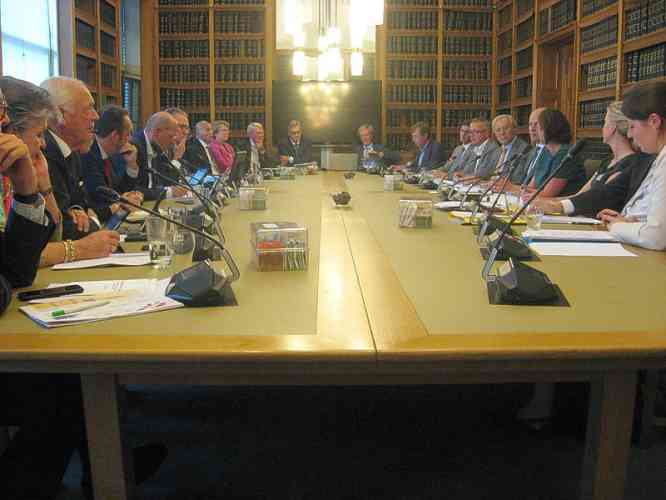 Dutch State Secretaries Van Ark and Knops (right of the table) discussed the social minimum with the First Chamber’s Permanent Committee for Kingdom Relations (left of the table). Photo by Otti Thomas.

THE HAGUE–Setting a social minimum at this point in time might have a disruptive effect, Dutch State Secretary of Social Affairs and Labour Tamara van Ark said on Tuesday.

For this and other reasons, no decision has been made yet about the minimum amount people need for an acceptable standard of living. However, Van Ark still aims to set a social minimum in the future, she told members of the Dutch Parliament’s First Chamber, the Senate.

The First Chamber’s Permanent Committee for Kingdom Relations demanded an explanation why the social minimum had not been set. Van Ark first said it was not possible because research by Regioplan showed that the cost of living for residents differed greatly per island.

“I was also disappointed, but the report resulted in the conclusion that at this moment a social minimum cannot be set. Cost for housing varies from zero to US $900. Which amount should you pick?” she asked.

However, the Senators were not content with this answer. “These two State Secretaries have accomplished more than previous governments, but I simply do not believe that it is not possible to set a social minimum. There should be a reference point to aim for,” said Senator Frank van Kappen of the liberal party VVD.

“This is clearly not a case of being unable to decide but of not choosing to make a decision,” said Meta Meijer of the socialist party (SP).

Senator Ruard Ganzevoort of GroenLinks said the researchers had never stated that it was impossible to set a social minimum. “They only said this decision should be made by politicians,” said Ganzevoort, who is also president of the Permanent Committee for Kingdom Relations.

Democrats D66 Senator Alexander Rinnooy Kan also said he does not believe a social minimum cannot be set. “Why do you hesitate? Are there consequences that you fear?” he asked Van Ark and Dutch State Secretary of Home Affairs and Kingdom Relations Raymond Knops, who was also present.

Van Ark acknowledged it was the conclusion of the Ministry of Social Affairs not to set a social minimum based on the report. The cost of living, in particular for energy and rent, is very volatile and will change again in the future. In addition, everything is related to something else, she said. “When the social minimum is set as a percentage of the minimum wage, local companies might go bankrupt. Naming an amount might have a disruptive effect,” she said.

She said she still aims to set a social minimum, but first wants to narrow the existing gap between the income of people in St. Eustatius, Saba and Bonaire and the high cost of living.

“There is no other way than doing this step by step,” Van Ark said, referring to measures such as the increase of the legal minimum wage, the social welfare (“onderstand”) and the child allowance (“kinderbijslag”). She promised to inform the First Chamber about the results before the summer of 2019, when she will also give an update to the Second Chamber.