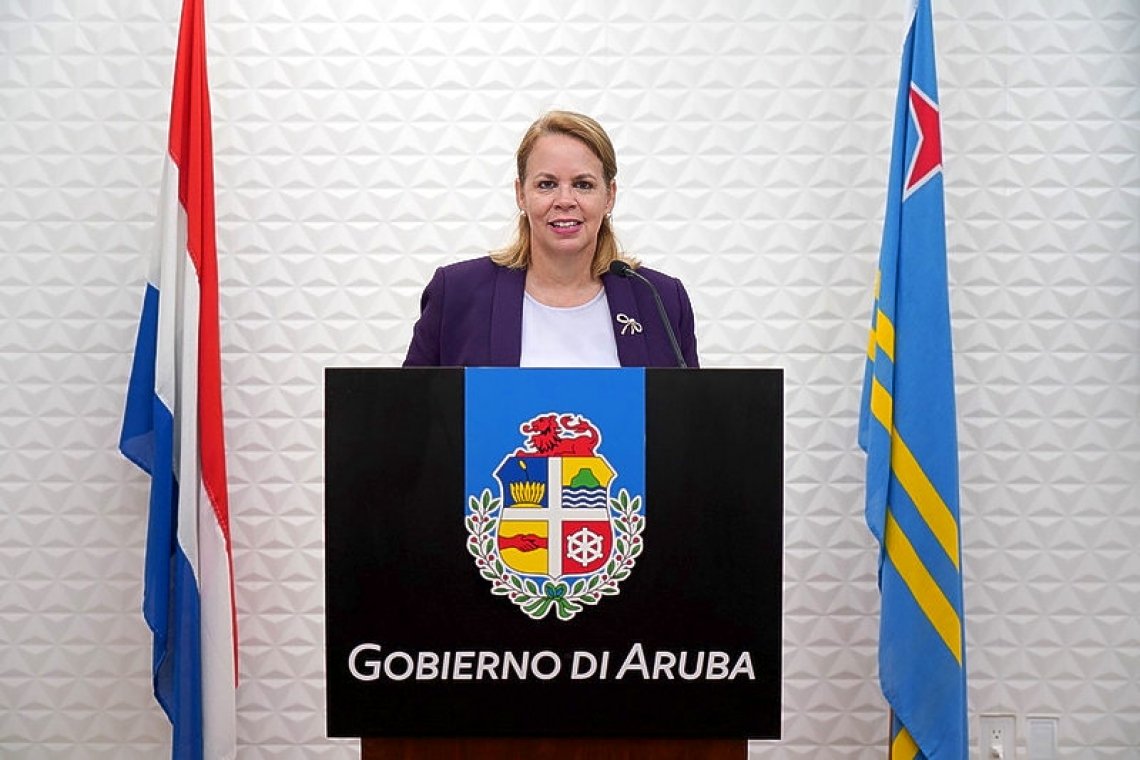 ORANJESTAD/THE HAGUE–Much to the chagrin of Aruba Prime Minister Evelyn Wever-Croes, Dutch State Secretary of Home Affairs and Kingdom Relations Raymond Knops threw a curve ball by adding a condition to the liquidity support that Aruba is supposed to receive this Friday.

In a highly unusual move, Wever-Croes provided details from a lengthy telephone conversation that she had with Knops on Sunday in anticipation of the Kingdom Council of Ministers meeting this Friday, where Aruba should receive the approval for a third tranche of liquidity support amounting to 204 million Aruban florins Afl. (US $113.9 million).

Wever-Croes said Aruba had complied with all conditions thus far, unlike Curaçao and St. Maarten, and as such the Aruba Committee for Financial Supervision CAFT last week advised the Kingdom government to approve an interest-free loan of Afl. 204 million which will cover the operational cost of the Aruba government for July, August and September.

However, to her surprise, during her conversation with State Secretary Knops, the latter announced an additional condition: Aruba must agree to resort under the Kingdom Law on Financial Supervision RFT that is already in place for Curaçao and St. Maarten. This means that Aruba would enter the purview of the Committee for Financial Supervision CFT.

“I asked him why, but he could not provide me a proper explanation, so I asked him to put this in writing,” said Wever-Croes, who was highly critical of the CFT. She mentioned a recent report of the International Monetary Fund (IMF), which she said stated that the CFT helped to wreck the economies of Curaçao and St. Maarten. “The CFT has [proven – Ed.] that it does not function.”

Aruba’s financial supervision by the CAFT is regulated through a national ordinance, and not via a Kingdom Law as is the case for Curaçao and St. Maarten. The prime minister noted that the RFT is a Kingdom consensus law, and therefore requires the approval of the country that it affects.

“I asked him what would happen if we did not say yes to the RFT before Friday. He said: then Aruba will not receive the three months liquidity support. We are with our back against the wall. This is unacceptable [and] improper,” she said.

Wever-Croes announced that preparations have started to have a broad dialogue with the social partners and the Aruba Parliament this Wednesday, to discuss this new, added condition. “This is not a decision that we will take on our own.”

Aruba wants to get clarity from Knops on the possible benefits of resorting under the RFT, such as the restructuring/refinancing of the national debt. Aruba will also assess what this would mean for the autonomous country status and its financial-economic position.

“We will not allow our economy to be wrecked like that of Curaçao and St. Maarten. I want to assure the people that we are taking this extremely seriously. We have one agenda and that is the well-being of Aruba and its people,” said Wever-Croes, who promised to keep the community updated in the coming days.

The prime minister was also not amused about the fact that up to the press conference on Monday morning, she had not received the documentation about the “new entity” that the Netherlands wants to create to channel future liquidity support for Aruba, Curaçao and St. Maarten. This new entity was announced mid-May, but so far, the countries are still in the dark about its format, scope and the authority that this body would have.

“In the so-called Four Country Consultation with the state secretary and the prime ministers of Curaçao and St. Maarten last week, we asked about this new entity. We asked the state secretary to please not come with the information last minute. We were promised that we would receive it today, June 29, but so far, nothing,” said Wever-Croes.

During the press conference, Wever-Croes provided some background information on the third tranche of liquidity support. The Afl. 204 million will contribute to covering the financial needs of government for the coming three months, namely expenditures, salaries, social and health funds, the economic recovery and stimulus programme FASE and the payroll support.

Not approved by the CAFT were the requests of the Aruba government to use Afl. 5 million for the general health cost insurance AZV and to put Afl. 40 million in an investment fund to maintain government equipment and facilities. Not only would this investment fund serve to help reactivate the economy, but it would also carry out urgent maintenance to the sewage plant.