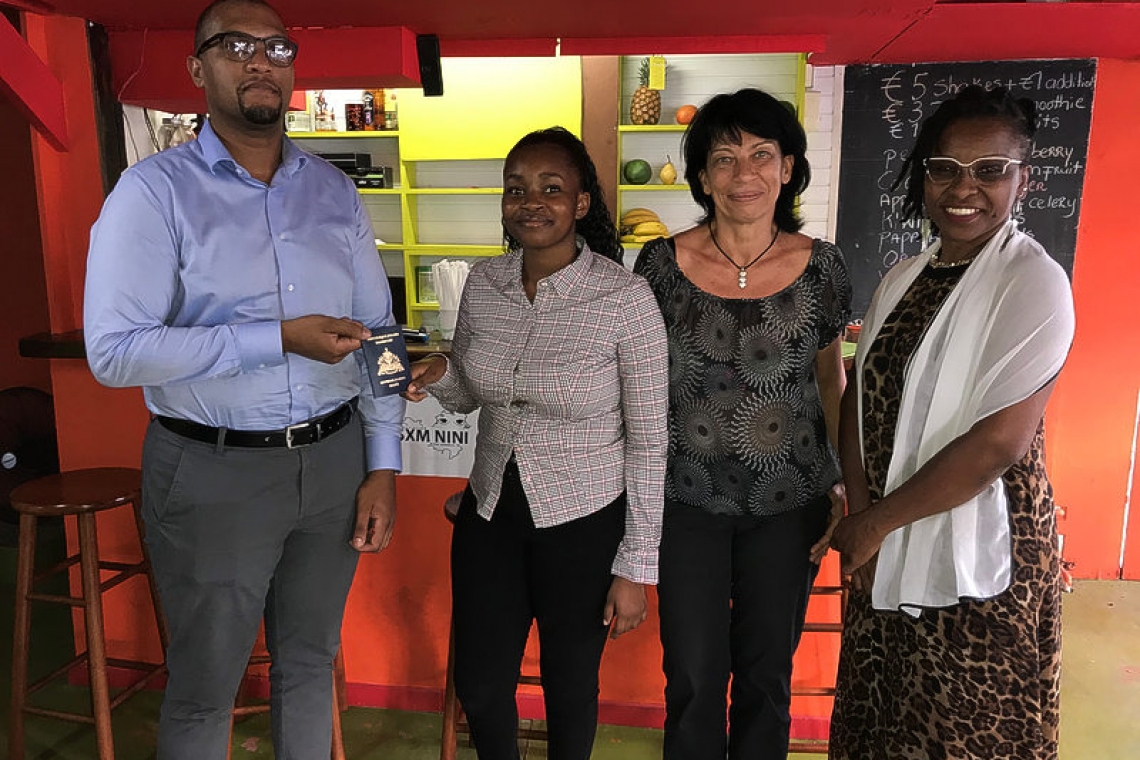 MARIGOT–A Haitian woman living in St. Martin with no documents to prove who she is has obtained her first passport through the help of the newly-formed SXM NINI Association.

Junette Pierre Louis (20) was presented with her passport by Consul of Haiti in Guadeloupe, Martinique, St. Martin and Dominica Carl Edouard Saint-Rey at the association’s recent inauguration.

“NINI refers to those people who cannot be sent back as they were born in St. Martin and their situations are often caused by cracks in society,” explained association President Sofia Carti-Codrington. “They cannot rent a car or house, they cannot be hired, nor can they get any social assistance despite the fact they were born on an island known for the various social advantages that France offers.

“They cannot be inserted [for training – Ed.], neither can they obtain their own birth certificate, the only document that can prove their existence. These are human beings. There are no boxes on the forms that meet their criteria so their choices are very limited.

“If they do get to travel, that too is limited. They can contribute to the crime rate. If they commit a crime their destinations will be the prisons in Basse-Terre or Baie Mahault. Saying ‘I’m from here’ does not help. The values of the French Republic – Freedom, Equality, and Fraternity – do not apply to persons in the NINI situation.”

Created in August 2019, SXM NINI Association works closely with the State (Préfecture). Its objectives are to put in place all the necessary information, prevention and integration actions; to inform the public; to support the most vulnerable to enable them to live better, meet their basic needs and maintain their human dignity; to raise awareness of institutional economic and social partners; and to help the NINI, social silence (stateless persons) to obtain a nationality, an administrative existence and a social life.

The head of the Office of State Representation in the cabinet of the Préfète, Dominique Cortes, said the woman’s situation was unusual and complicated, as she wanted to get a French passport for her son but had no documents to prove who she was.

Her parents seemed to have disappeared and the father could not acknowledge the child without the mother having any identification. She has been living alone in St. Martin. Cortes was able to resolve the situation through the Haitian Consulate in Guadeloupe. The process took about four months.

“The Haitian Consulate could only make the passport for from the woman’s Haitian mother, as her name includes the father’s name (from Dominica) as well. But the problem was the woman declared the child with the other name, so she could not prove the child was hers. But anyway, she will get a Carte de Séjour when the child gets a passport, which will enable her to work. The child was born in St. Martin and his father is French.”