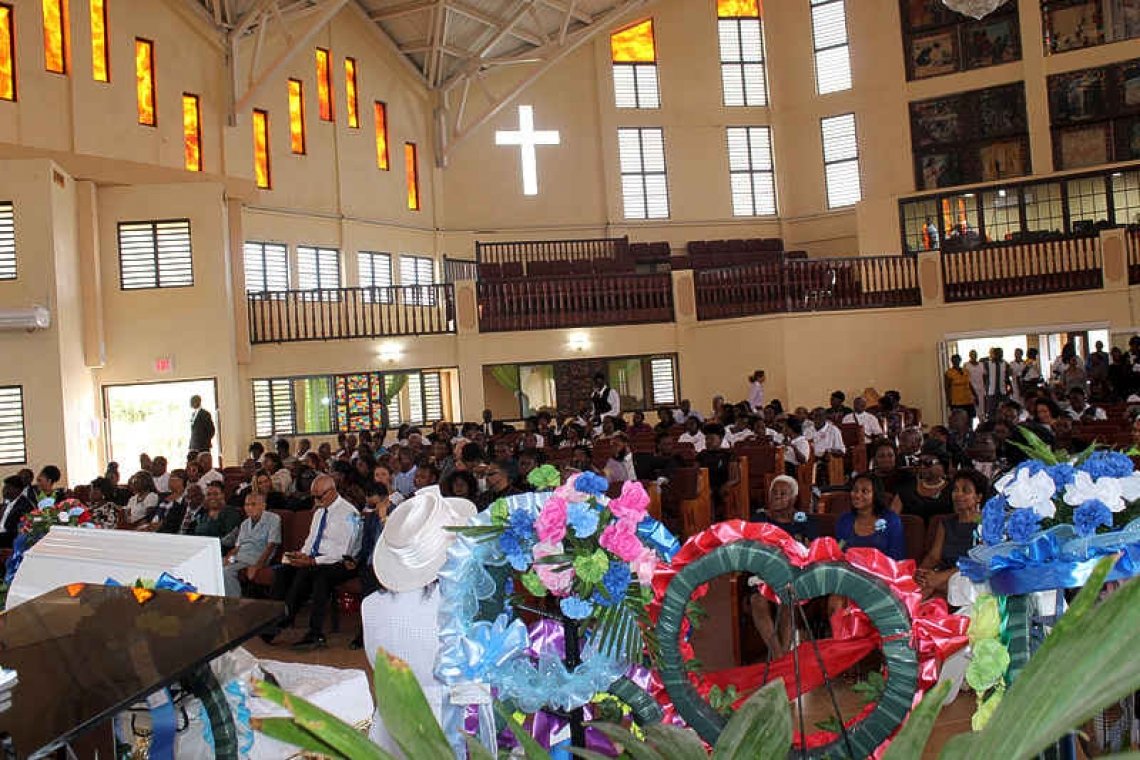 The funeral service of St. Eustatius’ former Director of Tourism Roland Lopes at the Seventh-Day Adventist Church on Thursday, August 20.

ST. EUSTATIUS–A large cross-section of the community of St. Eustatius came out to pay their last respects to the late Roland Lopes. His life was celebrated during a service at the Seventh-Day Adventist (SDA) Church led by pastor Earl Esdaile Jr. on Thursday, August 20.

Lopes was born in Aruba on May 25, 1949, to the late Ismee Constance John and Vincent Astor Lopes. He died on Friday, August 14. He leaves to mourn his wife Jacqueline Rogers, his daughter Ursula Priscilla, his son Roland “Rojay” Garfield and his grandson Ethan, as well as many siblings and a large extended family.

Deputy Government Commissioner Alida Francis said that everyone who knew him would agree that Lopes remained consistent in one core value: serving family, church and government, and by extension, the Statia community. “He believed in and worked until the very end towards a better Statia,” Francis said.

Former Island Councilman Clyde van Putten gave the eulogy. At the age of 15, Lopes obtained a job at Landsradio, during which he learned to speak Papiamentu.In his younger years he was very involved in many areas of the Methodist Church such as church school, the Boys Brigade and the choir. As a member of the Boys Brigade, Lopes taught himself how to play the bugle, the trumpet and many other musical instruments, but the trumpet was this talented self-made musician’s passion, Van Putten stated.“As early as 4:00am on the queen’s birthday and Statia Day, Roland would sound the trumpet to awaken the community for the formal flag salute and ceremonies. He played his trumpet at almost every funeral in Statia and many of the neighbouring islands, where he showed his love and respect to the grieving families,” Van Putten said. He also played and sang in Statia’s JB’s band.Lopes later opened a barber shop and excelled in sports, playing table tennis, cricket and football. He met the love of his life when Jacqueline Rogers vacationed in Statia in 1970, and they married four years later in Curaçao.

Lopes was baptised into the SDA Church on November 10, 1974. When Landsradio insisted he had to work on Saturdays, the principled Lopes chose to resign. To support his family, he had to take a much-lower-paying job as a carpenter at Old School Gallery. He also worked at the Fire Department, the airport control tower, the Finance Department and finally, the Tourist Office.Working in tourism for the Statia government, Lopes dedicated many years to learning the history of Statia. “He loved his job and was extremely passionate, especially when he travelled abroad to promote Statia. This gave him the opportunity to sell Statia on an international scale. He also learned a lot about Statia’s history by interviewing and talking to many of the older native Statians,” Van Putten said.Lopes was considered a pillar of his community, as he was “very supportive” to members of his church, where he held many positions. He also served the community at large, counselling couples who were facing difficulties in their lives or marriages.“Statia has lost an extremely knowledgeable and passionate historian. There is no other place on this earth that Roland loved more than the Golden Rock,” Van Putten said.

He described Lopes as a “loving, caring, sensitive and inspirational man. Roland was a man of principles, a dedicated and beloved husband, father, grandfather, brother, uncle and friend. Roland will forever reside in our hearts, minds and souls. We will miss his gentle, loving soul, magnetic personality, amazing spiritual gifts and natural talents, especially his sense of humour and unmatched story-telling,” Van Putten said.