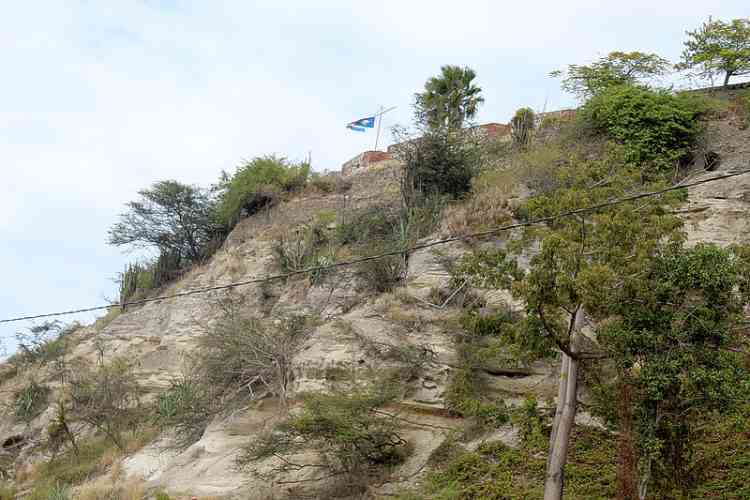 The cliff surrounding Fort Oranje before the clearing took place.

Acrobat X director Julien Ripert said that after the site was mobilised, workers started clearing there, including the removal of vegetation, putting work equipment in place at the highest point, and erecting temporary screens against possible rockfall during the works to protect Lower Town and Oranjebaaiweg below.

The next steps to be taken will include manual rock scaling and cliff reshaping to cut some of the hangers-on, after which the company can begin to have a complete vision of the cliff’s current state.

“We will receive many other containers with materials and machines which are specially conceived for special and rope-access works,” Ripert said. Because of the large scale, Ripert stated his company will be very busy logistically with regard to the project.

When asked whether there were any unforeseen difficulties so far in relation to the work, Ripert replied that not many difficulties or surprises were due to the cliff itself. The company encountered more issues making sure that its paperwork was in full conformity with all requirements for public-works companies. Because the cliff job is a special and intricate project, the company made sure that the technical aspects of its paperwork was in order, he said.

The Ministry of Home Affairs and Kingdom Relations, the Ministry of Education, Culture and Science and the Ministry of Infrastructure and Water Management are financing the project, which is contracted for more than US $10 million and is projected to be completed before the end of March 2020.

Anchors will be installed in the cliff wall in combination with steel netting and textile so that even the smallest particles will be held in place. The materials will also permit the growth of vegetation along the cliff. A concrete curb with a fence will also be put in place to hinder roaming animals in accessing the cliff’s bottom.

Access to Fort Orange has been cordoned off for safety reasons, to ensure adequate storage for the contractor’s equipment and materials, and to grant workers unhindered access to the cliff site. Access at the bottom of the cliff site has also been restricted.

Anchors will be installed at the top of Fort Oranje and at the bottom of Van Tonningenweg.