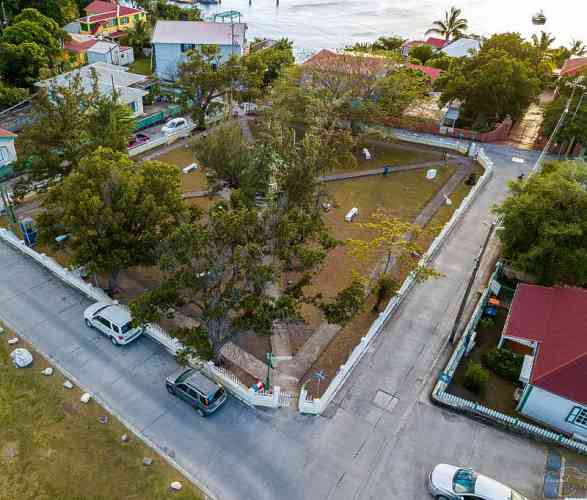 Aerial view of the Queen Wilhelmina Park on St. Eustatius.

The survey will focus on residents in the immediate vicinity of the Queen Wilhelmina Park and the Santo Domingo Association members, who have adopted the park for many years as well as the public.

Hard copies of the survey are available at the Government Guesthouse, Directorate of Society and Welfare, St. Eustatius Tourism Development Foundation and Government Information Service.

Persons can participate in the survey online via the Facebook page of the government of Sint Eustatius.

Renovations were carried out recently on the fencing (walls and gates) and lighting of the Queen Wilhelmina Park situated in the heart Oranjestad.

Now that those renovations are completed the Directorate of Society and Welfare would like to add two new features to the park: an outdoor fitness park (similar to the Earl Merkman Sport Complex) and mind games for families. The placement of these equipment and games will not take up much space and will therefore not hinder other activities from taking place on the grounds. There are also plans to reforest the area. For this feedback is needed from the Statia community.

On May 14, a Sport and Health Covenant was signed between St. Eustatius and the Ministry of Health, Welfare and Sport. The ambition is to get the Statia community more involved in activities that promote healthy living.

“By placing the fitness equipment at Wilhelmina Park we hope to spread out fitness possibilities on St. Eustatius. Fitness is one of several important aspects of promoting healthy living. In the coming months the community will be informed of the integral approach related to the implementation of the Sport and Health Covenant,” said Carol Jack-Roosberg, Director of the Directorate Society and Welfare.