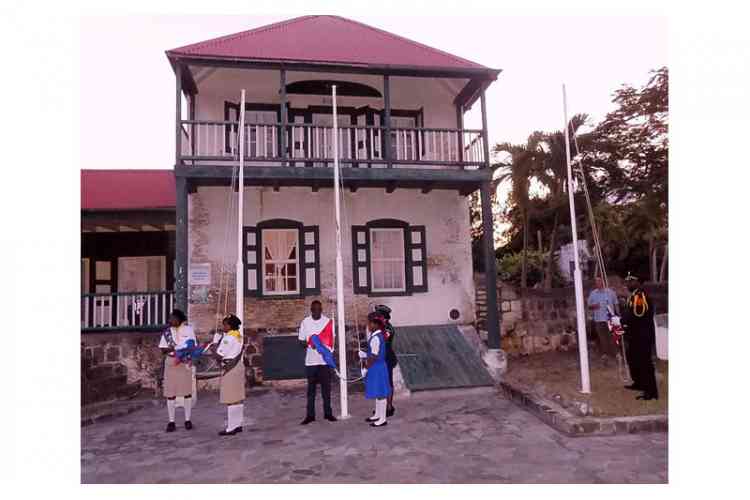 Uniformed groups hoisting the flags of Statia, the Netherlands and the U.S.A. at St. Eustatius Historical Foundation Museum

EUSTATIUS–The Statia Day week of activities programme from Friday, November 9, to Friday, November 16, was released on Tuesday with this year’s theme ‘’Our Flag, Our Identity and our Culture.”

All activities are night-time events and will be held at the Statia Day Stage across from Charlie’s place, and Gertrude Judson Bicentennial Public Library starting at 7:00pm.

Activities will kick off with a Gospel Night with International gospel artiste/evangelist Maxine Duncan.

Misha Spanner performing a dramatization at the 2017 Statia Day celebration.

A culinary competition will be held during the Tourism Night event on Tuesday November 13.

The ceremonial first salute and hoisting of the flags will be held at St. Eustatius Historical Foundation Museum grounds located in the historical core in downtown Oranjestad on November 16, Statia Day morning. Previously the ceremony has always been held at historical Fort Oranje where the first salute took place.

A competition is also set to take place on Statia Day morning when the best-dressed person decked out in the best cultural wear will have a chance to win two roundtrip tickets from Statia to St. Maarten.

A Bandorama Night will end the week of activities on November 16.

Statia Day came about on November 16, 1776, when the Andrew Doria of the newly created US navy entered Statia’s harbour and fired off a 13-gun salute, and Statia’s then-Governor Johannes de Graaff, a second-generation Statian, ordered return fire of an 11-gun salute from Fort Oranje. This was the first recognition of the U.S.A. as a nation, as that country was at war with Great Britain.

The first Statia Day celebration started under the leadership the of late Dr. William Snow, who would serve the schoolchildren ice cream and provide free T-shirts in the 1960s-1970s. Snow resided in Statia on Lampeweg for several years.