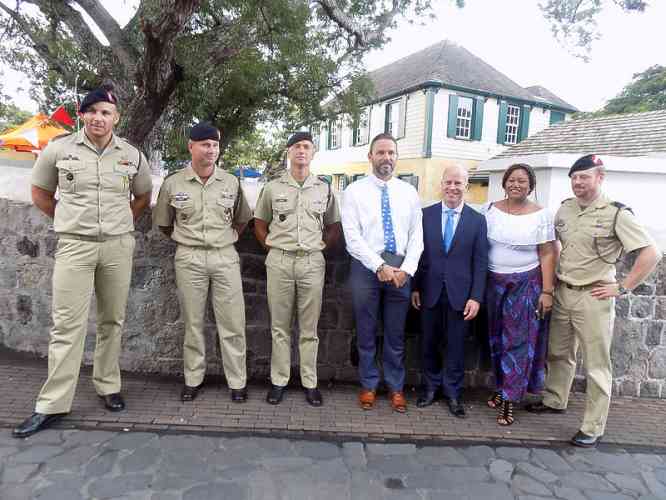 ST. EUSTATIUS–Statia Day was marked on Friday with vibrant colours, smiles and festivities. The day marked the 242nd anniversary of St. Eustatius’ first salute to the American flag.

Many people turned out for opening ceremony on the grounds of St. Eustatius Historical Foundation Museum in spite of the intermittent downpour of rain.

The Dutch anthem – “Het Wilhelmus” – was sung by Vashti Hooker. The United States anthem “The Star-Spangled Banner” was sung by Josiah Spellman of Soul Encounter of New York. Spellman has Statia roots; his grandparents resided in the same area the ceremony took place. The Statia anthem, – “The Golden Rock” – was performed by Cecilia Gitten-Roosberg, accompanied by Sjahairah Fleming and Ursala Lopes.

The Daughters of the King and others also performed at the opening ceremony.

Several persons who have contributed to the island were recognized at the ceremony including Joost Wijker, Mel Raboen de Sanchez Pacheco and Malvern Dijkshoorn-Lopes.

Luke Blair rendered his original composition which he dedicated to people of Statia and reminded them to be thankful.

Irvin Brown and Monique Brown were co-winners of the Best Statia Day Cultural Wear. They received round trip tickets to St. Maarten as their prize. Leonora Sneek-Gibbs was voted second followed by Reina Lijfrock and Beulah Simmons-Merkman.

Ellis Woodley and Malvern Dijkshoorn-Lopes were masters of ceremonies.

The first salute re-enactment by the US Coast Guard and Royal Dutch Marines was cancelled due to the inclement weather, rough seas and an emergency sea rescue.

In his address Knops said, “This is a very special island … I felt at home, as I live in a small village with 2,000 people and we have the same environment and same atmosphere where people know each other, people drink beers together and people have fun together.”

Franco said it was a great honour and privilege to celebrate his first Statia Day “with the resilient and hardworking people of Statia.”

Knops and Franco inspected the uniformed groups that paraded through the town. After the ceremony, guests were treated to breakfast, hosted by Super Burger, at the Mike van Putten Youth Centre. Biodegradable, recycled cutlery and dining ware were used.