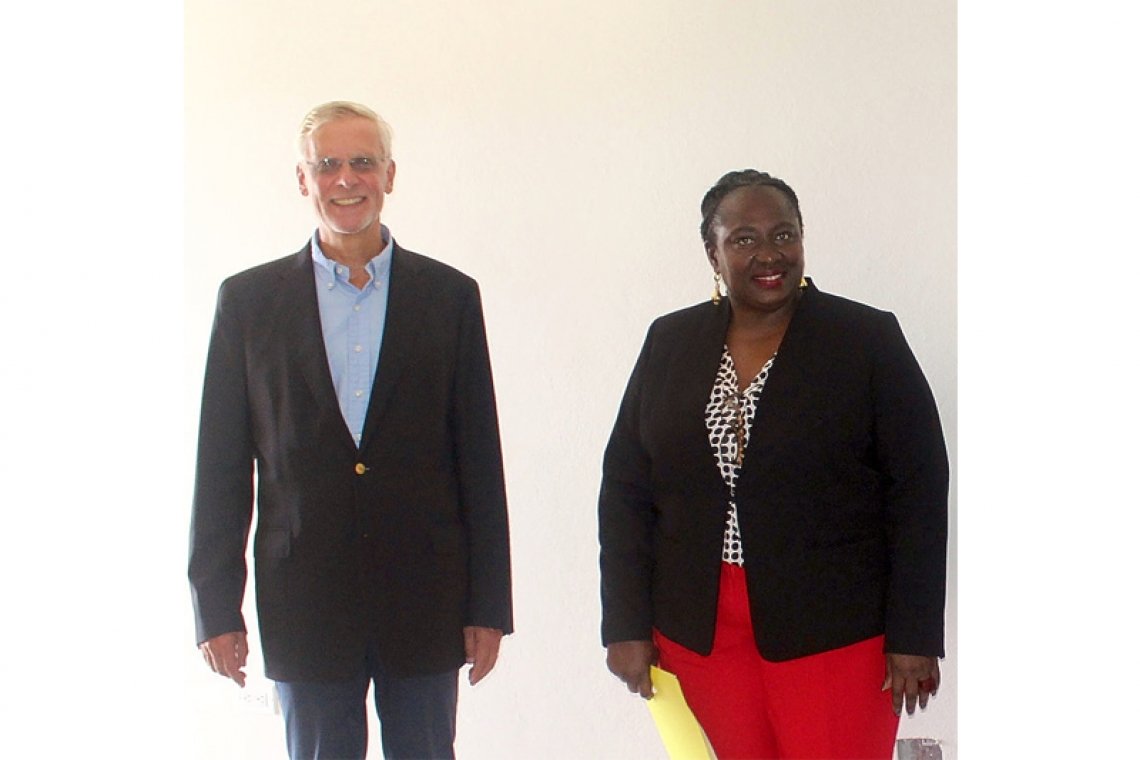 Deputy Government Commissioner Francis said the sole pharmacy in the island, the Golden Rock Pharmacy, has made it known that the over-the-counter section is once again open on condition that no more than five persons are allowed inside at a time.

Meanwhile, the medication centre remains available at the window and persons are requested to call 599-318-3301 for medication, or call/WhatsApp at 599-318-5052. The pharmacy is asking that persons continue to call ahead of time for their prescriptions, so they can be swiftly arranged.  Previously the in-store over-the-counter medication centre was closed to the public.

ZVK announced that for pregnant women and patients who require a referral to a gynaecologist, special arrangements have been made by ZVK for those patients who need to have their 20-week echo or those in their last trimester. These referrals can now be completed at “My Health Medical Clinic” by Dr. Dorette Courtar.

Francis said the same information applies for emergency cases, and as such in these cases, it is not necessary for persons to advance the payments themselves. She said these persons only require a referral from the midwife or from their general practitioner/house doctor.

The ZVK office is open to the general public on weekdays from Monday to Friday, 8:00am to 12:00pm and 2:00pm to 4:00pm. Persons who require more information can find it by calling 599-318-3376. Van Rij shared that he, Francis and the crisis team would be carefully looking at all the requests from stranded Statians that are abroad, within the coming days.   Government previously stated that the priority was to allow only essential workers, released patients and persons accompanying them to enter the island.

“Now we are also focusing on the other group because we realised that it is a big burden for a lot of the persons who are unfortunately stranded abroad due to coronavirus pandemic,” Van Rij said.

He said these persons’ patience has been the key to the island’s success so far in their strategy to keep the COVID-19 in very limited numbers on the island.

He expressed his appreciation on behalf of government for these persons’ sacrifice. Due to the fact that Bonaire is a Dutch Caribbean island and has been COVID-19-free for quite a while, government was looking at helping stranded persons on this island, Van Rij said. “We are now investigating whether it is possible to have a special charter flight arranged from Bonaire to Statia and maybe also to Saba,” he added. The flight will include essential workers and stranded Statians. Van Rij also spoke about the many individual requests the island has received. He said the local government has been in contact with the Netherlands Ministry of Foreign Affairs, which is responsible for the repatriation of Dutch citizens.

“I wish to inform that the local government was informed on May 18, that only large groups of Dutch citizens can be repatriated collectively,” he added. In the individual cases, persons will have to go to or contact the Dutch Embassy or Dutch Consulate about their individual case.

Van Rij said the local government can be a liaison to bring these individuals to the right contact, but it is not always easy to organise a flight out of a particular country.

He gave an example of how persons in a South American country could hypothetically get to Miami, Florida, but the issue would be that these persons would not know when they will be able fly from Miami to St. Maarten, and then onward to St. Eustatius.

The situation is changing so government is looking at every request as much as possible. Van Rij also spoke about stranded Statian students. A request was made that the students inform the local government when their school year or the university year would conclude. This was to provide government clarity on when the students would/could travel back to the island.

Due to the medical capacity in the island, Van Rij said the island cannot accommodate 60 or more persons travelling to the island all at once. What government is looking into is gradual travel plans where persons can travel to the island in small groups. “We are also very dependent on your information and that has to be as precise as possible as we will be really working on that the upcoming days and weeks just to find tailor-made solutions; and we also would like to stress that we would like to treat every request in a fair and equal manner,” Van Rij said.

If persons have any questions, they are requested to contact the government at 599-318-2552 and an email address is also being set up for persons to contact as well. “We know how many approaches stranded Statians abroad have sacrificed and suffered and we know you want to come back home,” Van Rij said.

The daily information programme by the local government will be reduced to Monday and Thursday at 7:00pm, but if urgent development takes place the Government Commissioners will address the public as soon as possible.