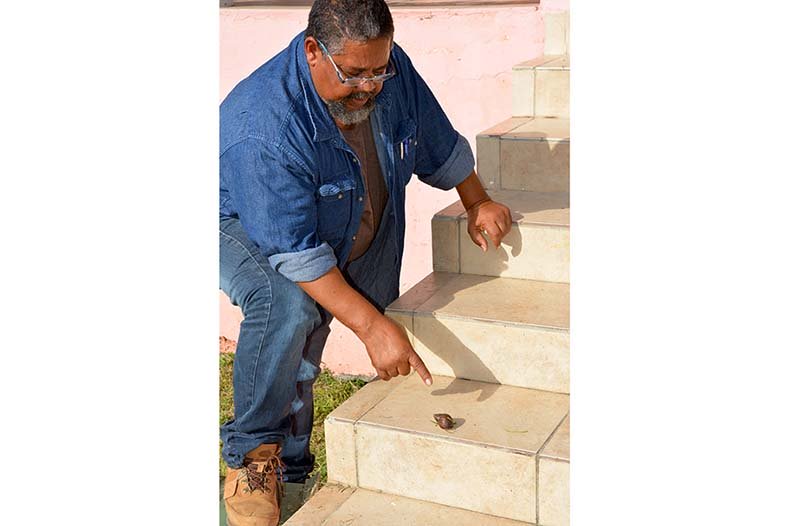 Gershon Lopes points to an unwanted resident of the Baybrow area, a small but hungry and dangerous great African land snail.

ST. EUSTATIUS–The great African land snail (achatina fulicia) has become a pest on St. Eustatius. The infestation by this non-native species has become so widespread that the local government has announced a set of strict measures to control their numbers. Of major health concern is that they carry microscopic worms that can cause a rare kind of meningitis in humans.

The problem was first noted three years ago on the Baybrow area. However, even though the creatures move at a snail’s pace, recent heavy rains have caused them to double the size of their territory. They have now reached the Concordia road into Concordia and Cherry Tree and are currently crawling over a square kilometre of residential land.

Gershon Lopes, Inspector of Nature and Environment says that he is already working with all the stakeholders on an immediate plan of action. “For the last two weeks, we have been laying bait to poison the critters but their offspring keep coming back and spreading out.” Agriculture Commissioner, Charles Woodley has called for the whole community to cooperate with local authorities. “This pest must be literally and figuratively stamped out. We have pledged our full support in the fight to wipe out this scourge,” Woodley told The Daily Herald.

A community awareness campaign has been launched through local radio and other media to inform people how to deal with snails. “To avoid infection, you should only touch the snail with gloves,” Lopes insists. “Children should be warned to keep away from them!”

“Common table salt will kill them. However, seaweed collected from the beach or even beer spread about the yard will do the trick overnight. This is particularly effective since the snails tend to come out and feed at night. We have delivered Sluggo poison to 85 residents so far and will accelerate its distribution to more homes.”

Lopes said that letters have been sent to owners of vacant plots with a deadline to clean their property. “Failure to do so will result in their property being cleaned by the department of agriculture LVV at the owner’s cost. Unoccupied lots will be seeded with bait initially whether they have been cleaned or not.”

The inspector points out that the snail is on the list of the 100 most harmful invasive alien species in the world. It was first found in southern Florida in the 1960’s and it has taken 10 years and one USD million to eradicate it. Meanwhile in Miami, Labrador retrievers have been recruited to a team of 45 volunteers to eradicate these invasive and slimy pests.

One of the most damaging snails in the world, it consumes at least 600 types of plants and can cause structural damage to plaster and stucco structures. Its rate of reproduction is far from stationary. Having both male and female sex organs, they can lay up to 1,200 eggs per year.

Six months ago, a study was carried out through CNSI by two students from the research institute IMARES of the Wageningen University. The students, Lara Uphoff and Friso Dalm directed their team of snail hunters throughout the Baybrow area to “murder the molluscs.”

“A combination of assassination techniques were used,” explained Uphoff at the time. “Poison together with handpicking twice a week was quite sufficient and we even set up snail traps to monitor the population.”

Their efforts to capture and exterminate these poisonous creatures proved successful in all of the 118 gardens that make up the estate. “However, the snails tend to hibernate in dry weather for years,” explains Lopes. “They may have removed them above ground but below ground, the pest was playing a waiting game. Come the heavy rains from the last few weeks and the snail trail has become longer.”

Jessica Berkel, Marine Park manager from STENAPA reports that the nature foundation has a team of volunteers standing by to assist the government authorities. “The last thing we need is an explosion of these energetic plant eaters. Government departments are really coming together on this urgent issue. Statians care about nature but the nature of this particular pest is unwanted,” Berkel stated.