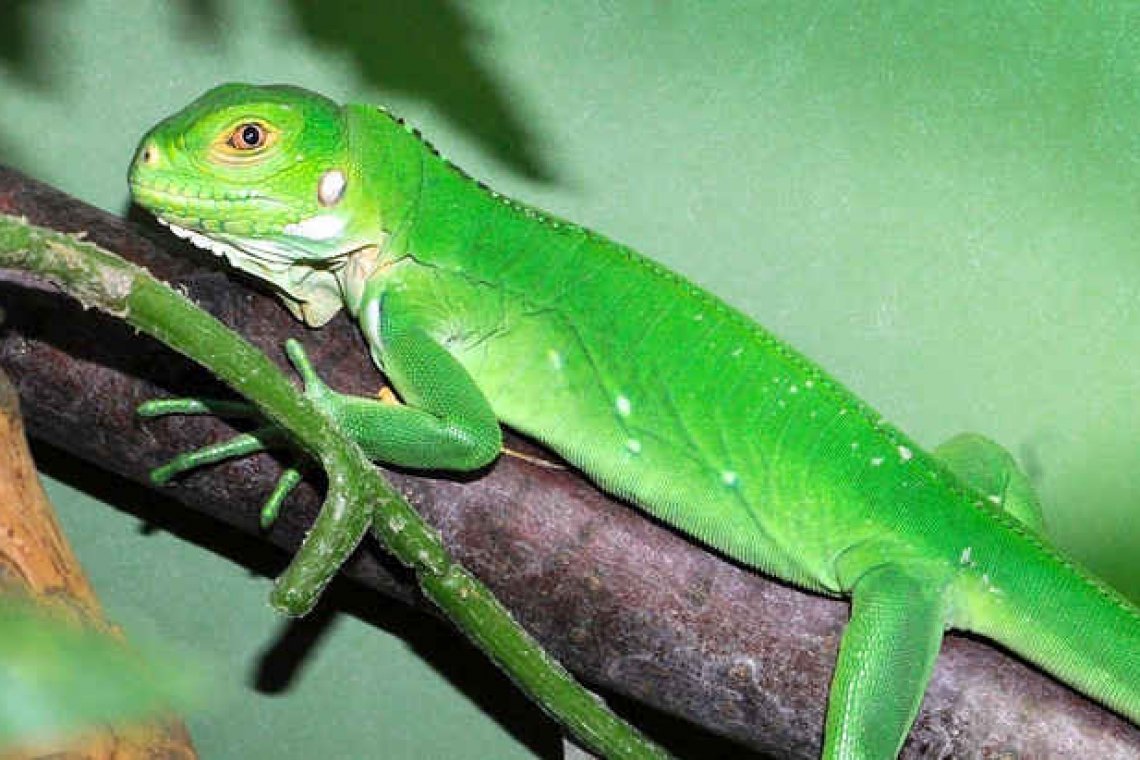 The zoo, in the Netherlands known as Diergaarde Blijdorp, announced the good news on Tuesday. The Lesser Antillean Iguana (Iguana delicatissima) is a critically endangered species found on some 10 islands in the region and its population sizes have been subject to a rapid decline.

The Lesser Antillean Iguana, not to be confused with the predominant Green Iguana, is on the Red List of the International Union for the Conservation of Nature (IUCN) as an endangered species facing extinction. St. Eustatius is the last refuge within the Dutch Caribbean. Sizable populations of this iguana species can be found on Guadeloupe and Dominica.

To help save the iguana species from going extinct, four young Antillean iguanas, two males and two females, were transported from St. Eustatius, via St. Maarten, to the Netherlands on May 15, 2018 to take part in an international breeding programme at the Rotterdam Zoo.

The iguanas were special guests on the Dutch government aircraft with on board Prime Minister Mark Rutte who returned to the Netherlands after a visit to the Dutch Caribbean. Now, two years later the first baby has been born. The iguana’s birth is an important moment for the international breeding programme in which the Rotterdam Zoo plays an important role.

Caretakers at the zoo saw the mother iguana digging a hole in the soil in May this year to lay her eggs. As a precaution, the eggs were placed in an incubator. After 98 days, movement in one of the eggs was observed.

First, the head emerged, and the next day, the entire body was out of the egg. Upon birth, the baby iguana measured 24.5cm in length, including the tail. It is still unknown whether the baby is male or female. For the time being, the young animal will remain separated from his parents, in the care of special zoo personnel.

Because it is important to involve the St. Eustatius people in the protection of the endangered iguana species, school children on the island will give the baby iguana a name. The St. Eustatius National Parks Foundation (STENAPA) will assist in this process.

“We hope that the Statia people will become so proud of their iguanas, that eventually this species will have nothing to worry about anymore,” said caretaker Sandra Bijhold, who has been taking care of the four iguanas since their departure from St. Eustatius in 2018 and accompanied the animals on their voyage.

St. Eustatius has temporarily lent the four animals to the Rotterdam Zoo. The offspring of these four are genetically of great importance to the breeding programme. The total project is a close cooperation with other nature conservation organisations: STENAPA, the Netherlands expert organisation for reptiles, amphibians and fish RAVON, and the Durrell Wildlife Conservation Trust.