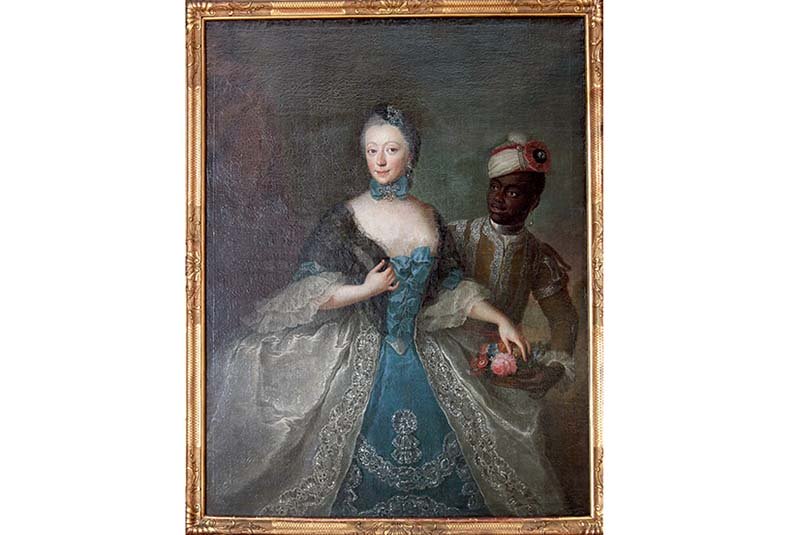 Cocquamar Crenequie who was christened Willem Frederik Phillippe is painted with the mother of his master count Bertrand Philip Sigismund Albrecht van Gronsveld.

AMSTERDAM–The tiny South Holland town of Weesp is currently paying homage to a peculiar part of its history, through an exhibition that narrates the stories of Africans who worked for the town’s dignitaries in the 18th century. Among these remarkable men who left African traces in Weesp, but whose faces were – in some cases literally – erased from history, is one man named Amsterdam from St. Eustatius.

The exhibition “From the Shadows, new light on African servants at Weesper notables,” opened at the Weesp Museum to a small crowd of townspeople on March 25, fittingly one day before the International Day of Remembrance of the Victims of Slavery and the Transatlantic Slave Trade.

It aims to confront Dutch people with the possibility that their history contains more nuances than they are probably aware of. While in its colonies overseas slavery was the norm, the Netherlands outlawed the practice “at home.” Having a black person to show off to your white friends, nonetheless added to the prominence of rich people. Many notables had renaissance style paintings of themselves made, in which they posed with their lavishly dressed African servant; a display of their opulence.

The glass cabinet in the expo that is reserved for Amsterdam from Statia.

Weesp, a picturesque little town near Amsterdam with the mysterious narrow cobblestone streets of yesteryear, was even smaller back then, but several of its residents earned bundles distilling gin in the 17th and 18th century.

“Weesp was no exception to the habit rich Dutch people had back then to hold African servants. There could have been about seven of these men here in the 18th century. Consider that these men married Dutch women and fathered children, which would make them the direct ancestors of many white Dutch people. That casts a whole new light on the Dutch history,” said museum curator Lisette Zijp.

History has given only one of these African men a face. The “From the Shadows” exhibition is an attempt to drag all of them out of the obscurity, into the light so to speak.

Prominently featured in the main room is a painting of a beautiful white woman that almost seems out of place in an exhibition about black men; that is until one notices that to her right, in the dark of the picture there is a striking African man of about 25 years old: Cocquamar Crenequie who was christened Willem Frederik Phillippe is painted with the mother of his “master” count Bertrand Philip Sigismund Albrecht van Gronsveld (1712-1772). The count owned Holland’s first porcelain factory, in Weesp.

“They tried to erase that black man from the painting,” a man perusing through the exhibition suggests. The painting is from 1740, but it was indeed until centuries later that researchers realized that the distinguished-looking woman was not alone. Restoration would unearth Phillippe, whose story the exhibition is now attempting to give credence to.

Another prominent figure who appears in the exhibition is Christiaan van der Vegt, servant in the 18th century to Weesp mayor Abraham D’Arrest. What Christiaan’s African name was and how he ended up in the town is unknown, but he had married a girl from Weesp and they had ten children. “Imagine the surprise of (white) Dutch woman Annemieke van der Vegt when she in 2013 – 250 years later – unsuspectedly decided to research her past and came to find that she is a direct descendant of this African servant.”

The discovery has captivated Annemieke; she has since done profound research into her forefather, even visiting Ghana last year. While she continues to chronicle her findings and Christiaan’s story on the website Hoe Heette Christiaan.nl (what was Christiaan’s real name), she has also been able to convince the town to honour the forgotten African with a commemorative plaque that will be unveiled on May 7, 2017. Christiaan’s story and Annemieke’s efforts to find his real name are also featured in the “From the Shadows” exhibition.

As is the story of Amsterdam, an African man from Statia, who apparently served Hendrik Schimmel, who in the 1780’s represented the West Indian Company WIC from Amsterdam as a member of the Council of Police. The owner of Weesp gin distillery ‘Het Anker’ (The Anchor), the Dutchman did good business in Statia, from where his alcohol reached as far as the United States of America. When he returned to the Netherlands, he took Amsterdam with him as his servant. They probably first lived in Amsterdam where the Schimmel family held offices, and then moved to Weesp, where Schimmel was named the town’s Sherriff. Afterward Schimmel continued to run the gin distillery with his brother Jan Hendrikszoon; Amsterdam probably also worked in the distillery.

But when Schimmel realized that the African man was homesick, he had a notary draw up a manumission – release papers – for him on June 15, 1792. Researchers say this hints at a certain amount of affection Schimmel must have developed for Amsterdam, because he obviously did not want him to be returned into slavery upon his arrival back in Statia. “In Holland, Amsterdam was a free man, but without this manumission he would surely have been enslaved the moment he arrived back in Curaçao,” one researcher supposed.

In the glass cabinet in the expo that is reserved for Amsterdam, attention is paid to the moment Schimmel decides to have the release paper drawn up. “Since Paris (the French revolution of 1789) I uphold the principles of liberty, equality and human rights, but I still served the WIC in the colony St. Eustatius. As a member of the Council of Police, I have helped to maintain slavery on the island. That is why I know that it is important that Amsterdam returns to the Caribbean as a free man; and stays a free man. My decision to have the manumission drawn up should be seen in this light. Without it Amsterdam will become a slave again when he arrives there.”

The manumission took effect on April 1, 1794. It is, however, not clear if the African ever returned to Statia as intended and what had become of him.

With the Dutch slavery history gaining a lot of attention in recent years, the exhibition “From the Shadows, new light on African servants at Weesper notables” is being hailed for unearthing a crucial overlooked part of the Dutch past. Small in scale, it is also considered an important upswing to a large exhibition of “African servants at Hague notables” that is opening later this year at the Museum of History in The Hague in September, and a slavery exhibition that is scheduled to open in 2020 in Rijksmuseum in Amsterdam. “From the Shadows” will run through August 27, 2017.

Not everybody is excited about these exhibitions though. Said one afro-Dutch man when asked if he would visit: “I am tired of seeing myself and my ancestors as enslaved people and mere servants. I want to see us as the kings that we actually were.” The exhibition is nonetheless still attracting black people, many of whom were unaware that Africans roamed the Netherlands and Europe way back in the 15th century.