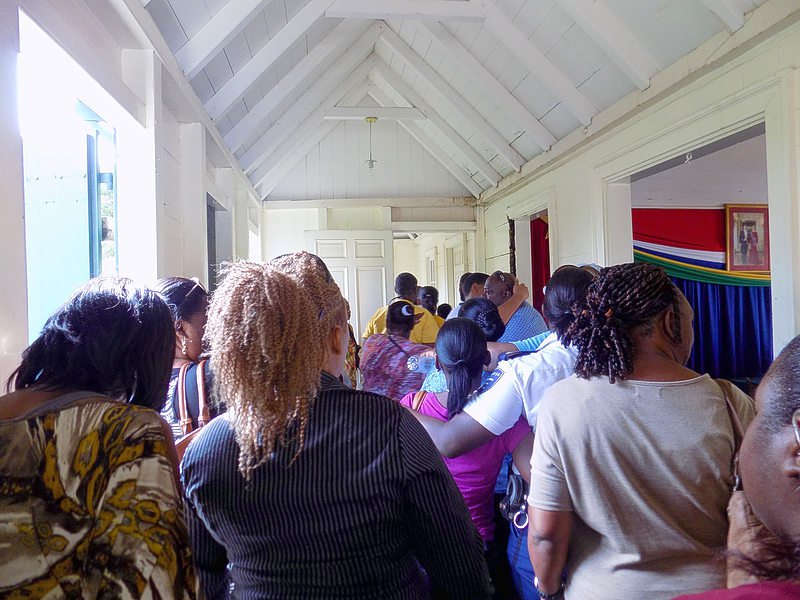 STATIA–A police officer in St. Eustatius went on trial on Tuesday on charges of ill-treatment. One of the two incidents for which he is on trial is said to have occurred on the neighbouring island of Saba.

The Prosecutor has demanded a suspended sentence of six months conditional and 240 hours of community service for L.C. (39). The judge is expected to give a decision in the two cases against the officer within three weeks via a video conference from St. Maarten.

The first incident, in which C. tried to arrest a suspect who resisted arrest, was caught on the cameras of Big Rock Supermarket in Saba. The officer tried to prevent the suspect from entering the supermarket without a shirt on and a scuffle ensued and was captured on the video footage shown in court.

The scuffle escalated with an exchange of words between the officer and suspect. C. told the court footage of the man under arrest taking a swing at him had not been recorded due to a pillar blocking the scene. However, the footage did capture C.’s reaction to the aggressive man.

The second case against C. revolves around the claim that he physically abused a minor with a PVC pipe in an attempt to discipline the child. The Prosecutor presented the pipe in court as evidence.

The officer was called by the child’s guardian Jennifer Simmons, who complained that the child was misbehaving by throwing stones at a room and the occupant was afraid to come out.

C. spoke to the child, but there was said to be no change in behaviour. Simmons is said to have told C. to discipline the child on her behalf and is said to have brought the almost-foot-long PVC pipe used in the incident.

The Prosecutor showed the Court the result of the beating on the child’s skin in photos.

C. knows the child, who affectionately calls him “Uncle.” The officer is said to have meted out similar punishment, aimed at curbing bad behaviour, more than once in the past.

C.’s attorney Jason Rogers argued that disciplining a child is different in Caribbean culture, although he does not condone violence against a child. He asked those gathered in Court whether they would “spare the rod and spoil the child” and was met with a resounding “no.”

C. did not have intentions to hurt the child, only to put him on the right path, the attorney said. He pleaded with the judge to not inflict double punishment on the 17-year veteran officer who has been on suspension since March 5 and has had a third of his salary withheld.

C., who was very emotional, said that when he was suspended he had felt like someone had taken his heart from his body and left it to beat outside. He also questioned how he would tell his two children he did not have sufficient money to feed them due to his suspension. “I have two children and I would go to hell and back for them,” C. said.

Statia Basic Police Chief and other colleagues of C. attended the court session, as did a number of the officer’s family members and friends. It became an emotional scene in the court after C.’s mother and other relatives broke down in tears seeing him on trial.