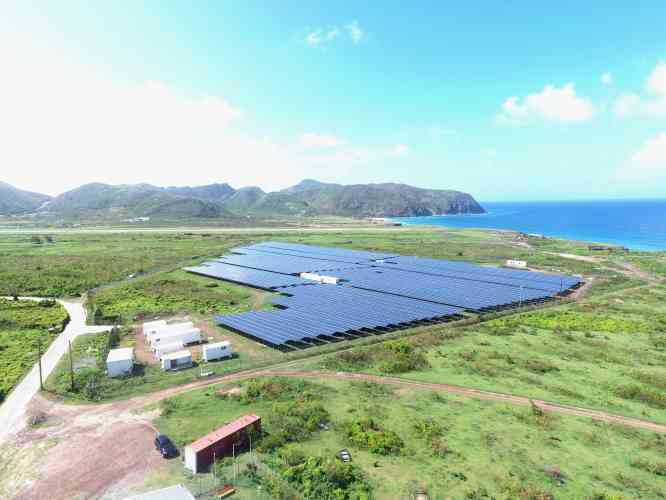 THE HAGUE–St. Eustatius and Saba are doing well in the area of generating energy in a sustainable manner. In St. Eustatius 46 per cent of the electricity is sustainably generated and in Saba this percentage is currently at 20, but will increase to 40 by early 2019.

The second phase of the solar park became operational in St. Eustatius late 2017. With 46 per cent of the electricity generated in a sustainable manner, St. Eustatius is the front-runner where it comes to green energy in the Caribbean Netherlands, according to Minister of Economic Affairs and Climate Eric Wiebes.

In his response to written questions posed by Members of the Second Chamber of the Dutch Parliament Rob Jetten and Antje Diertens, both of the Democrat D66 party, about the investments in sustainable energy in the Caribbean Netherlands, Wiebes explained that the Statia solar park was a “very modern and innovative” technical project.

He explained that the use of the most modern power electronics at the solar park in St. Eustatius made the network stability higher than in the past. He added that these results were only possible through large subsidies from the Dutch government.

It is the preference of Statia’s utility company Stuco to build more solar parks instead of constructing wind turbines, despite the several studies carried out in the area of wind energy. “This change in approach is due to Hurricanes Irma and Maria of September last year: there was damage to wind turbines on other islands whereas there was no damage to the Statia solar park,” stated Wiebes.

In February 2018, Saba’s Executive Council gave the geothermal research company Teranov from Guadeloupe a three-year exclusive right to research the potential use of geothermal energy in Saba.

“It is unsure whether this will be successful, and the process requires a lot of time due to the necessary research and test drilling, but in case of success, it offers the opportunity for Saba to become 100 per cent sustainable in generating energy,” Wiebes said.

In Bonaire, all focus is on wind energy. Bonaire has several wind turbines that generate 11 megawatts, about 30 per cent of the electricity supply. However, this percentage is declining due to the increasing demand for electricity.

Due to this increase in demand, the Integrated Utility Plan of Bonaire’s electricity company WEB gives a higher priority to steady supply and affordability than to sustainability. There appears to be insufficient basis to implement Ocean Thermal Energy Conversion (OTEC) on the island.

Instead of solar energy and OTEC, Bonaire is opting to double its wind capacity in 2021 by constructing more wind turbines that generate an additional 12 megawatts. According to the research report “Renewable Energy Future for the Dutch Caribbean Islands Bonaire, St. Eustatius and Saba,” this is the most efficient way to reduce carbon dioxide (CO2) emissions.

Responding to questions of Members of Parliament (MPs) Jetten and Diertens about the additional work opportunities that could be generated through sustainable energy, Wiebes remarked that the production of sustainable energy was capital-intensive, not labour-intensive. The construction of wind turbines or solar parks created some additional work for the people on the island, but part of this work is specialist work that cannot be supplied by the local workforce.

Asked by Jetten and Diertens about the securing of affordable electricity for small consumers, Wiebes explained that there is a special tariff for this group in Bonaire, St. Eustatius and Saba. “However, affordable does not mean cheap,” he noted.

October 21, 2021
0
CBS graphicSABA/ST. EUSTATIUS--Consumer goods and services in Bonaire were 4.3 per cent more expensive in the third quarter of 2021 than in 2020. Inflation in Bonaire stood at 0.3 per cent in the second quarter of this year. In...
Read more
Headlines & Top Stories

October 21, 2021
0
Island Council members during a meeting.ST. EUSTATIUS--The St. Eustatius Island Council will gather for a meeting of the Central Committee at V.A. Legislative Hall...
The Daily Herald