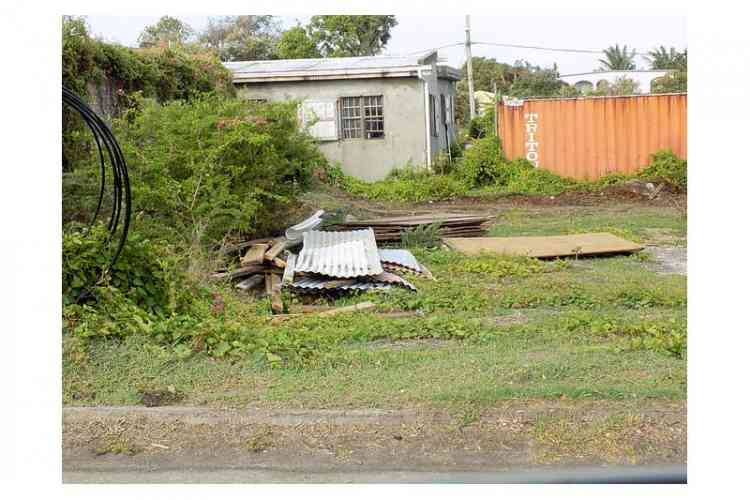 Loose galvanized zinc, beams and plywood in a neighbourhood in St. Eustatius.

ST. EUSTATIUS–Many residents of St. Eustatius had been busy Thursday securing their homes for the passing of Tropical Storm Isaac. Preventative measures were not only taken by residents, but also by utility company STUCO, which cut and removed large trees.

All schools on the island and a few afterschool programmes closed their doors on Thursday. In a Disaster Committee meeting held Thursday, it was decided that all schools will resume today, Friday, September 14.

Government offices remained opened Thursday and Windward Islands Bank closed its doors at 12:00pm. Certain businesses remained open throughout the day, while others announced they were closed on Thursday.

Supermarket shelves emptied quickly as customers stocked up on goods for the passing storm. Boat owners removed their vessels from the water.

While some were storm-prepared, others were not as in a few areas on Statia loose lying zinc was seen without these items being secured.

There are quite a few abandoned homes that suffered damages during the passing of Hurricanes Irma and Maria last year. Sheets of galvanised zinc flapped around in these areas as the wind blew on Thursday, posing a possible hazard to the recently repaired homes.

The Royal Netherlands Meteorological Institute KNMI reported Thursday morning at 11:00 that the Tropical Storm Watch for St. Eustatius and Saba was discontinued. A Tropical Cyclone Advisory concerning rough seas due to tropical storm Isaac remains in effect for both islands.

Isaac was expected to pass approximately 280 to 310 kilometres (180-190 miles) south of Saba and Statia on Thursday evening.