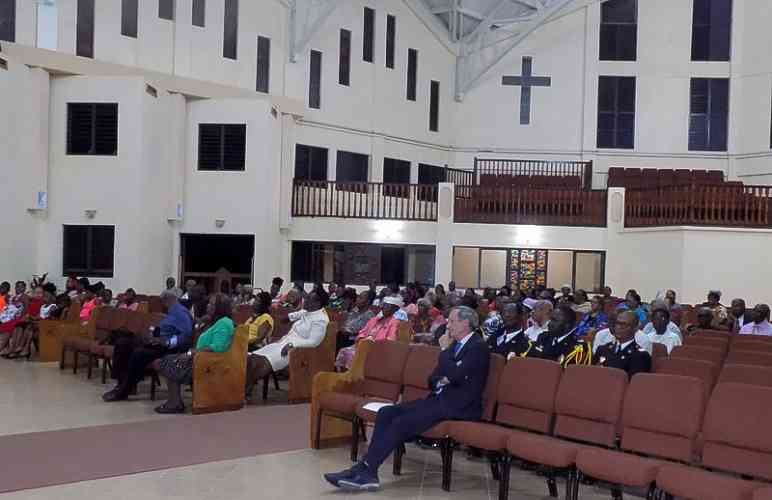 ST. EUSTATIUS–Senior citizens of St. Eustatius were honoured during a church service on the occasion of World Senior Citizens’ Day, which was observed on Monday, October 1. The service, which was held at Seventh-Day Adventist Church in Newton’s Pasture, was organized by “Lady of Culture” Marcella Gibbs-Marsdin.

A moment of silence was held for the seniors who have passed during 2017-2018. Their names were mentioned, which included that of the oldest person on the island, Albertha Timber-Maynard, who passed away at the age of 100.

Ruth Pandt-Leerdam, who was accompanied by two juveniles, expressed words of welcome to the seniors. Pandt-Leerdam invited persons under the age of 60 to go and greet the seniors in attendance. She then asked them to sing “Let Us Greet Somebody in Jesus Name” as they greeted each other.

There were various group performances such as b the Methodist Junior Choir. There were solo renditions, as well as duets and other performances during the service.

Guest speaker Pastor Rolston Philbert’s sermon was titled “You Have to Trust God.” At the end of the service, persons under the age of 60, lit candles for the seniors in attendance. The elderly Statians were thanked for their love and prayers over the years as the candles were presented to them. They also received a token of appreciation.

Gibbs-Marsdin will be hosting a “Hat and Tie” party in celebration of all seniors at Mike van Putten Youth Centre today, Thursday, starting at 6:00pm.

The social event, she said, was planned with the seniors in mind. “You ladies get those beautiful hats out, and you gentlemen get your tie and hat if you feel like and come out to enjoy the evening with us.”