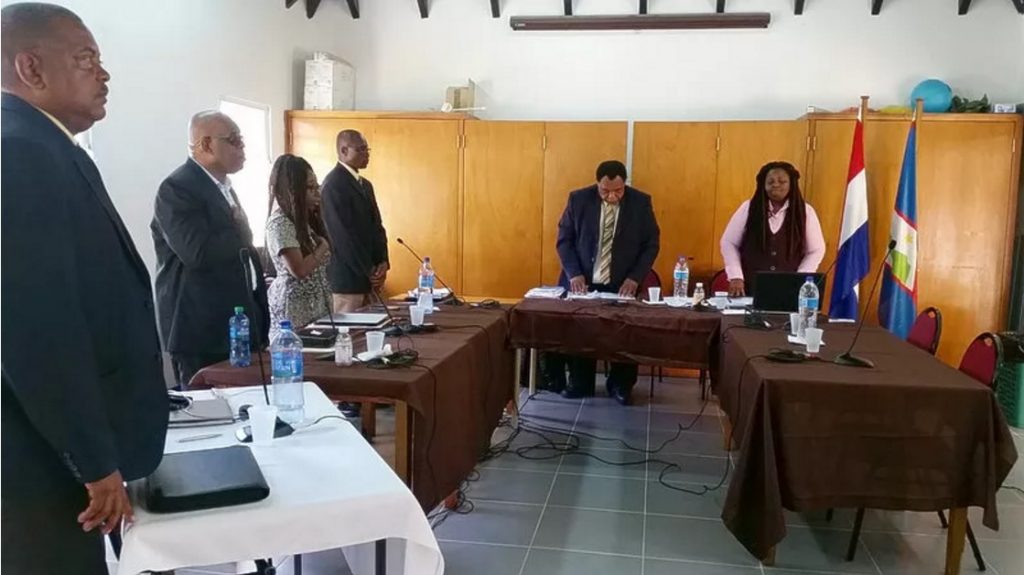 THE HAGUE–A delegation from St. Eustatius will be travelling to The Hague from April 18 to 21 in preparation of a round table with representatives of the Dutch Government. Among the points of discussion is a “white paper” on a draft constitution for an autonomous St. Eustatius.

During next month’s visit to The Hague, the Statia delegation wants to discuss a number of subjects, such as the functioning of (preliminary) supervision, the implementation of recommendations by the Spies Committee, and IdeeVersa, as well as a draft-constitution for an autonomous St. Eustatius, the Executive Council said.

The draft-constitution was attached to the letter to Minister Plasterk in a so-called “white paper.” Copies of the letter were made available to the media, but a copy of the white paper was not included.

Other points of discussion will include the Economic Development Programme aimed at sustainable development and self-reliance, as well as a feasibility study for an autonomous St. Eustatius.

They are to consult with various Ministries, as well as new Members of the Dutch Parliament’s Second Chamber, “and other relevant persons and entities,” the Executive Council wrote in a letter to Minister of Home Affairs and Kingdom Relations Ronald Plasterk, which was sent Thursday, March 23.

The Executive Council said that due to its supervisory role, Committee for Financial Supervision CFT was also invited to be part of the delegation.

Aim of the delegation’s travels to the Netherlands is to maintain a dialogue and to prepare a round table which will be presided over by a so-called “Committee of Wise Men.”

The round-table conference and the Committee were agreed upon during the latest visit to Statia of Secretary General at the Ministry of Home Affairs and Kingdom Relations Richard van Zwol on March 3. In the letter to Minister Plasterk, the Executive Council said the meeting had been “pleasant, constructive,” and with much content.

In this regard, the Executive Council expressed hope that the outcome of the talks marked the start of a “new, more positive phase in the relationship between the Netherlands and St. Eustatius.”

With regard to capacity building, the Statia delegation will also be meeting with Statians in the Netherlands. who have shown an interest in returning to the island to take up jobs within government, and to contribute to the development of Statia.

The delegation members will be making preparations for their work visit to the Netherlands in the coming days, and said they are counting on the cooperation of Minister Plasterk and the various Ministries.