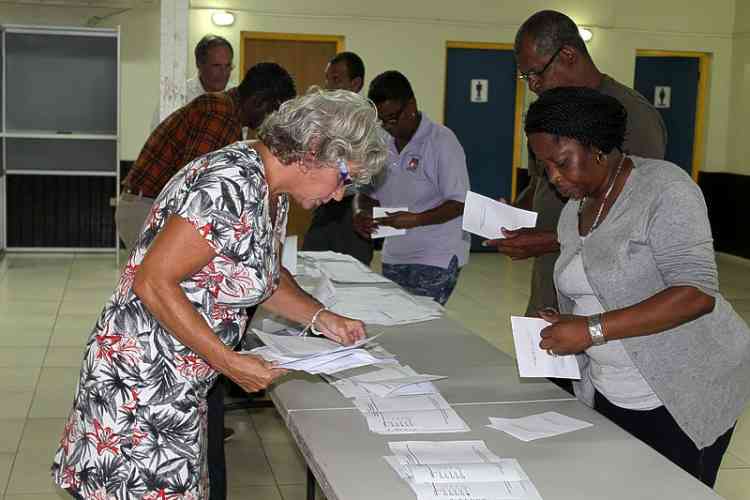 The voting bureau counting the final tally of votes cast on Wednesday night.

EUSTATIUS–Voters in St. Eustatius were able to cast their vote for Electoral College representatives for the first time on Wednesday.

Voting booths opened at the Mike “Ernest” van Putten Youth Centre/Lion’s Den at 7:30am, where the only polling station on the island was located. Voting was only for Electoral College representatives. Government Commissioner Marcolino “Mike” Franco was on hand to oversee the process and ensure that everything ran smoothly at the voting bureau. Members of the St. Eustatius Census office also visited the Voting Bureau.

The St. Eustatius Census Office is undergoing a clean-up of its registry, and according to the Census Office there are 3,113 persons residing on the island and of this number 1,878 are eligible voters.

Deputy Government Commissioner Mervyn Stegers and his spouse Yolanda visited the polling station and cast their ballots around 1:00pm.

The DP Statia party has five candidates participating in the elections: Adelka Spanner, Nicolaas “Koos” Sneek, Ernie Simmons, Winston Fleming and Shanna Gibbs-Mercera. Several of St. Eustatius’ candidates cast their ballots in the morning. Sneek was the first of the DP Statia candidates to cast his vote. At 9:30am, 32 had cast their votes; around 11:30am the number climbed to 90; by 3:30pm that total was at 170 and at 5:00pm there were 190 votes cast.

Throughout the day voters were trickling in slowly to cast their vote. The St. Eustatius voting bureau closed at 9:00pm Wednesday.

A total of 374 votes were cast for Statia candidates for the electoral college.

There were three invalid votes and five ballots were blank.

The vote count was triple the amount of the friendly wager among the voting bureau members, who estimated how many persons would come out to vote in the election.