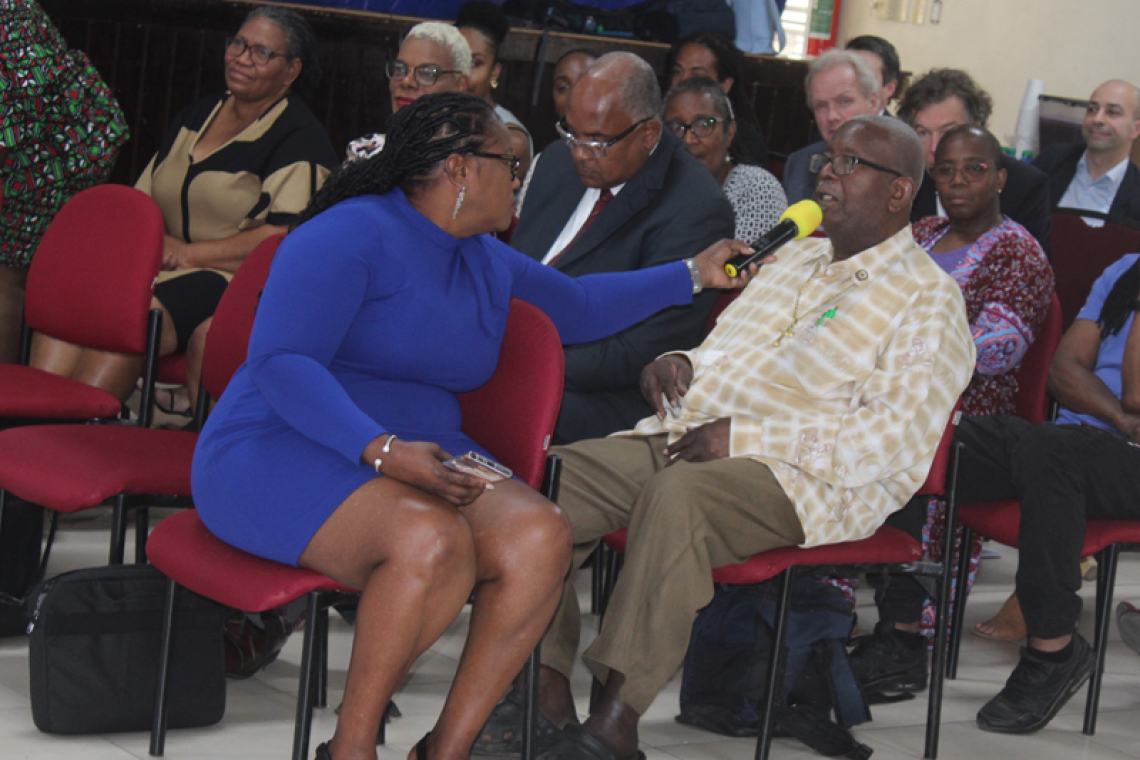 Many people from all walks of life in St. Eustatius and from abroad gave their opinions and personal experiences with discrimination and racism they are still facing today in the Caribbean, Suriname and in the Netherlands itself. A protest was also presented by Ubuntu Connected Front (UCF) Caribbean.

Kenneth Cuvalay
President of UCF and St. Eustatius Afrikan Burial Ground Alliance Kenneth Cuvalay protested during the town hall meeting. He said that “in memory of our warrior African ancestors who fought against colonial rule for our freedom,” UCF “and many supporting advocacy organisations” did not accept the excuse for the Dutch slavery past which Prime Minister Rutte pronounce on behalf of the Dutch State.
Rutte, and his previous and successive cabinets and governments have never considered the descendants of enslaved people as full citizens of society, said Cuvalay.
“Time and time again you insulted descendants of enslaved people and/or citizens of African descent in your policies, laws and regulations, as well as openly in the media.”
Slavery and the slave trade, including the transatlantic slave trade, were declared crimes against humanity by the United Nations (UN) and the European Parliament in 2001, but the Dutch state voted against the resolution, Cuvalay said.
“Your cabinet subsequently failed to implement the UN International Year for People of African Descent” in 2011, which included the themes of recognition, justice and development.”
The Dutch government did not establish a national action plan in the subsequent UN “International Decade (2015-2024) for people of African descent, with the same themes and named the “Reparations Decade”. In October, the Dutch voted against a UN resolution against the transatlantic slave trade, colonisation, global racism and discrimination.
Cuvalay said the Dutch government has never given a substantive response to questions from civil society about the annual use of the “Golden Coach” on Budget Day.
“Even the King has never responded to their requests, or formally distanced himself from the Golden Coach to this day,” he said. “Your statement in 2013 that ‘Black Pete is Black’ and the announcement in July 2020 that your cabinet saw nothing in Dutch apologies for the slavery past because it would only have a polarising effect are etched in our memory, despite your recent U-turn.”
Rutte announced Monday’s “meaningful moment” during his weekly press conference on Friday, indicating that after apologising, the Dutch government will not pay reparations “for running the most criminal enterprise in Dutch history,” said Cuvalay. “Your statement that no reparations in the form of payment of arrears of wages for enslaved people will be paid is also proof to us that the racist colonial actions of your predecessors are also deeply rooted in your genes, your cabinet and government.
“The preparations leading up to this day have also clearly shown that the cabinet and government have not understood what this dossier is essentially about: recognition, justice and development.
“For example, conclusions of ongoing investigations into the slavery past will not be included, apologies will be made for irrelevant groups with regard to the slavery past, and descendants of the true heroes in the battle will not be included on the list of invitees in the Netherlands, the Republic of Suriname and the Caribbean islands Aruba, Bonaire, Curaçao, St. Maarten, St Eustatius and Saba.”

Arlene Spanner-Schmidt
Directorate of Economy, Infrastructure and Nature policy advisor Arlene Spanner-Schmidt thanked the Netherlands for taking a step and for the apology. “My statement is not an acceptance of the apology. I have an open mind and will wait to see what will happen next.”
She asked whether the 200 million euros promised by the Dutch government to raise awareness and address the effects of slavery was to be divided amongst the seven territories, including Statia, and wished to know where the report “Chains of the Past” could be read.
Spanner-Schmidt said the dialogue and funding were welcome. “This should not come with the ‘who pays, decides’ concept, because there is no one in the Netherlands who knows what is best for Statia’s people other than Statia’s own people.”
She also said that discrimination is against the Dutch Constitution. “The Netherlands makes all the laws. They are making laws that implement, promote and enforce discrimination, and then use these same laws to their convenience any time they deem fit.”

Urisha Blake
Youth participation coach at the public entity Urisha Blake said, “The Netherlands has acknowledged and apologised for the atrocities against my ancestors, but what about the atrocities still taking place?”
She said that students from the islands do not have the same rights as their European counterparts. “Students travel to the Netherlands and can’t be written in, get student loans, bank accounts, housing or even free public transportation without social security numbers ‘burger service nummers’ (BSN)”.
She also mentioned the lack of proper healthcare, social minimum and the countless other rights that islanders from the Caribbean Netherlands islands do not have, even though they are part of the Netherlands.
It is her assertion that there are still forms of slavery “and a blatant disregard for the humanity of the people of the Dutch Caribbean.”

Eric Henriques
Former Commissioner Eric Henriques said he was proud to see young people speaking up to carry the island forward. “We respect our forefathers and -mothers who died in slavery, but we have to respect our young people in this country who are coming with no future in front of them because they are sitting back and waiting for what Holland can do.”
He said it hurt him to hear that persons are still facing racism and discrimination, even in their workplace.