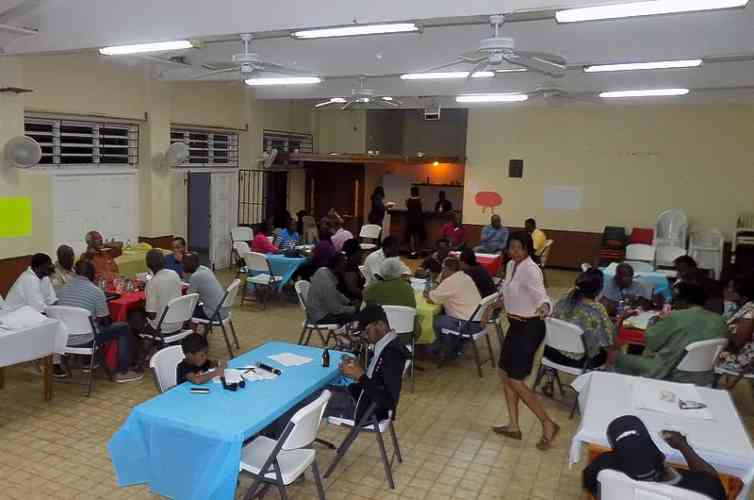 ST. EUSTATIUS–During a town hall meeting hosted Saturday by Brighter Path Foundation, residents of Statia shared their insights regarding the current governing situation. Participants wondered if the “take-over” by the Dutch Government was based on democratic principles and wondered “who is to blame” and where “did things go wrong.”

The town hall meeting was held under a different format under which participants were grouped together around individual tables.

Persons present had a clear vision of Statia’s future. The Statia envisioned by the participants ranged from having a strong economic base with a diversified economy to community organisations fighting for environmental and healthcare needs.

“There will be more parental involvement in the community and Statia people will show interest in the political development on the island,” one of the groups of participants said.

In a recorded message expert in government and politics from St. Maarten Julio Romney stated he had been monitoring the recent political developments on Statia. He gave a brief description of what a Public Entity of the Netherlands entails, after which he explained that the islands of the Dutch Kingdom are subject to scrutiny by the Kingdom Government based on the concept of good governance.

Romney recommended that the people of Statia educate themselves, not only about the Constitution of the Kingdom of the Netherlands, but also about the fundamental human rights afforded to all persons in the Kingdom including the Public Entities. Statians were also advised to seek a meaningful dialogue with State Secretary of Home Affairs and Kingdom Relations Raymond Knops, and if possible also with the Kingdom Council of Ministers as it relates to the postponement of next year’s Island Council election.

During the last segment of the gathering, participants were given the opportunity to express their thoughts about the content of the evening programme. However, the move by the Netherlands to take over the administration of the island dominated the conversation.

Persons expressed their shock and disappointment and again posed the question, “What type of structure are we currently under. Is it a dictatorship?” Despite the shock and anger, persons also expressed that they remain hopeful for the future.

Event organisers said a thorough report of the event will be shared with the Kingdom Council of Ministers, the Dutch Parliament’s First and Second Chambers, the Parliaments of St. Maarten, Aruba and Curaçao and with participants.

The organisers concluded the evening by saying that a series of subsequent town hall meetings will be scheduled to further expand on what emerged during Saturday’s meeting.