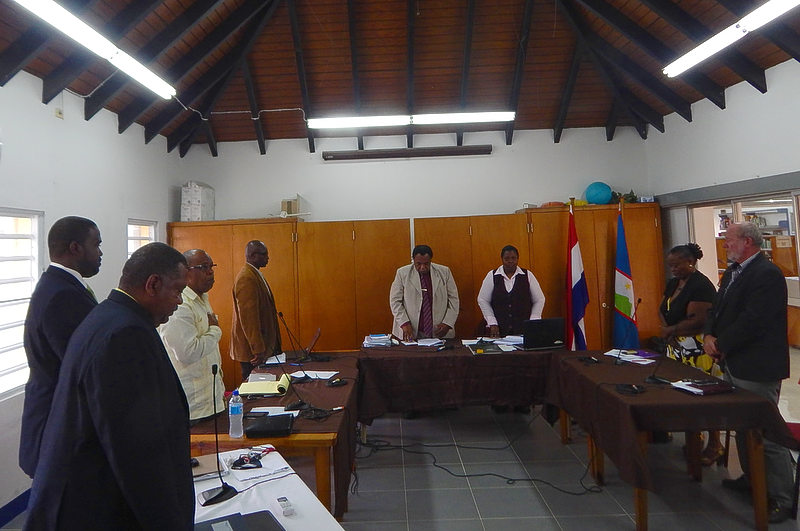 Opening of the Island Council meeting on Pension Fund of the Caribbean Netherlands PCN.

ST. EUSTATIUS–The Island Council of St. Eustatius unanimously adopted a motion in protest of the intention of Pension Fund Caribbean Netherlands PCN to cut the pensions by 3.5 per cent as per April 1, 2017, and by another twelve per cent in 2018.

Capitalization of the Fund needs to be at 100 per cent as there needs to be sufficient money in the fund to pay out all the future pensions. The Fund’s coverage rate is currently at 77 per cent, which is not allowed by law.

The full Executive and Island Councils both agree this will seriously impact the purchasing power of seniors, especially with the tax system that is in place now.

Independent Island Councilman Reuben Merkman said that in the past there were many studies done into the alleviation of poverty but “for whatever reason, those with the ability to do something about it have dragged their feet. The Central Bank of the Netherlands carried out a study and right away they implemented their decision and hit the islands where it hurts the most, to the seniors who have already been struggling with stretching their monies to stay above water. It was made mandatory for persons to join the Pension Fund and they are being affected by the PCN reduction through no fault of their own. All Council members are on one wavelength in trying to help the PCN pensioners.”

Rechelline Leerdam of Progressive Labour Party (PLP) said PCN had issues since 2013 and nothing was done. She questioned whether any “true” research was put into setting up the fund. “The pensioners should not be the ones to pay the cost for the unpreparedness of others, considering they already paid into the Fund. Poverty alleviation has been touted as a concern by the Dutch and this measure will cause more poverty, and no one in the Second Chamber is jumping up to do anything for the seniors,” she said.

According to PLP leader Clyde van Putten, PCN is short by US $70 to 100 million. “Persons involved in setting it up knew that the money put into it was not enough beforehand. This situation is why we are looking in the direction of constitutional reform.”

He said he would vote for the motion, but is convinced it will be another document that will reach the desk of a Minister and of the Dutch Parliament “and nothing will be done.”

Koos Sneek of Democratic Party (DP) said the cutting of pensions was contradictory to what all parties in the Netherlands have been saying concerning poverty alleviation. “The pension reduction will surely raise poverty on the island,” said Sneek. “Everyone is waking up to the reality. Unions are organizing, and current and future pensioners have started a petition. It is good to have their support,” he said.

Adelka Spanner (DP) said that in 1998 civil servants were compelled to join General Pension fund of the Netherlands Antilles APNA, but many civil servants wanted to use a private pension instead. “Persons who worked 40 to 50 years for their pension should not be going through this. Pensioners already have to pay tax on their pension, and by 2018 they could be losing as much as 15.5 per cent.”

Spanner implored the Executive Council to sit down with the Dutch Government to find ways and means to help the pensioners.

Commissioner Derrick Simmons said he took the motion very seriously and would do his part in looking for remedies. “Persons who have given their service to the country have done their duty and also paid into a plan, therefore, we should honour them.”

Commissioner Charles Woodley stated that the Executive Council would make sure that those worried about their pension would have the opportunity to make an investment in the island, so later on in their life they are not solely relying on their pension. He said they are speaking with the Medical School to see if it can be brought back to the island. This would give citizens a chance to invest.

Woodley encouraged residents of Statia to set up their own pension fund by setting aside monies in a bank account and stating to the tax office that this money is destined for their pension. He said the Executive Council would do everything in their power to help.