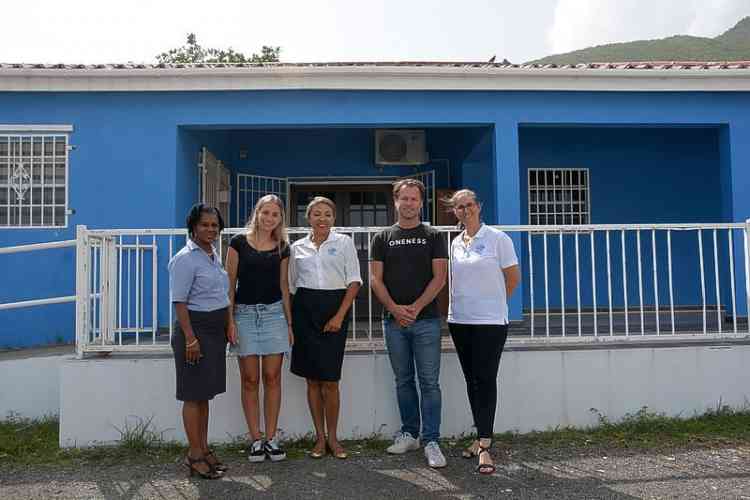 PHILIPSBURG–Representatives of the Stay Strong SXM foundation from the Netherlands arrived in St. Maarten on Friday, September 14, to visit the Catholic schools that received two 40-foot containers filled with items after Hurricanes Irma and Maria last year.

The donated material consisted of sports and educational material, furniture, clothing and new shoes donated by a store; 11 new digital boards were also purchased by the foundation via one local vendor.

The focus of the visit was to find out if the materials that were sent after Hurricane Irma were received and whether they were usable. The Stay Strong SXM foundation is accountable to its donors and decided to visit and represent the interests of these donors.

A report has to be compiled, which includes how monies that are still available can be allocated. Also, an inventory of future investment of funds with the Catholic schools was gathered as part of the report. The non-profit Stay Strong SXM foundation, which met with the superintendents of Catholic schools today, said it would like to make purchases via local vendors in St. Maarten.

Donors and organisations in the Netherlands including former teachers and schools in the Netherlands have organised several fundraising drives to collect monies and material for St. Maarten. In November 2017, a Skype live contact with the Municipal Councillor in Amsterdam-West was organised between the Visser School in Amsterdam and the director of Foundation Catholic Schools St. Maarten. More than 25,750 euros from 10 schools was collected and presented.

Other funding came from a drive organised by former gym teacher Robert van Rijw, who left St. Maarten at the end of the 2017-2018 school year. He raised 15,000 euros. Together with Juriaan Otto, also a former gym teacher of the Foundation Catholic Education, needed gym materials for the schools were purchased.

Nadja de Beer, who worked for the Prosecutors Office in St. Maarten and Juul van Aldenhuijsen-Sleeuwen, a former teacher and coach of Catholic schools were the initiators of the Stay Strong SXM foundation. “Both ladies brought awareness of needs via the media in programmes such as De Wereld Door, RTL news, Hart van Nederland, and Jeugdjournaal, amongst others in Holland. They also visited several fundraising drives through the Netherlands,” the release said.

According to the representatives about 80,000 euros has been collected for the schools.

Representatives of the foundation expressed satisfaction with the way the material was received and put to use. They were impressed with the responses from the children and staff of the schools.

Foundation Catholic Education St. Maarten also expressed appreciation to their former teachers and now friends for their selfless actions during a time St. Maarten needed support. Representatives of the Catholic school board will also visit the Netherlands in the near future to thank their sponsors as well. Stay Strong SXM foundation said they were committed to donating the remainder of the monies to be used for items needed by the schools.