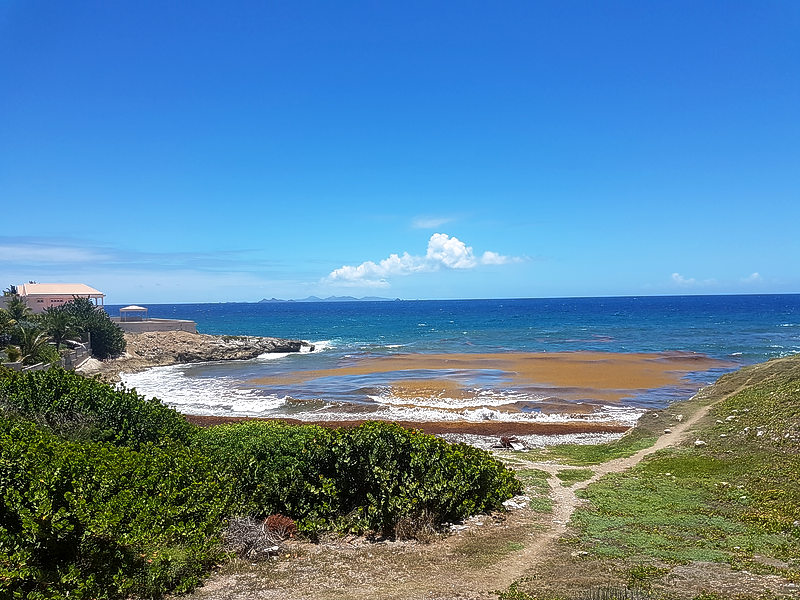 COLE BAY–A steady influx of Sargassum seaweed to St. Maarten waters over the past few weeks has been reported by Nature Foundation. The influx of seaweed is very evident along the eastern shore of the island since mid-April.

“We are now working on coordinating with stakeholders regarding the removal activities of the seaweed, which can cause serious risks to nesting sea turtles and hatchlings,” said Nature Foundation Manager Tadzio Bervoets.

The Foundation has continued its monitoring efforts with partners in the region. Based on weather predictions and aerial surveys, plus monitoring efforts along cost, “we are seeing a medium influx of Sargassum now for the past two weeks,” said Bervoets.

Economically speaking, there is a serious effect that seagrass can have on the beaches of the island. As soon as the grass is cleared, it is being deposited back on the beach by the wind and currents. We will continue to work towards researching the effects of the grass and some possible solutions, but at this point, Sint Maarten, like many islands in the Caribbean, is being heavily impacted.

Sargassum first plagued the Caribbean in 2011 and 2012, with the Foundation having to warn swimmers to avoid swimming in Guana Bay in August and September due to the large amount of Sargassum Weed, and many beach-front residences and hotels having to continuously clean washed-up Sargassum.

Sargassum is a genus of brown (class Phaeophyceae) seaweed which is distributed throughout the temperate and tropical oceans of the world. Most of the Sargassum Seaweed lies concentrated in the Sargassum Sea, a region in the middle of the North Atlantic Ocean surrounded by ocean currents.