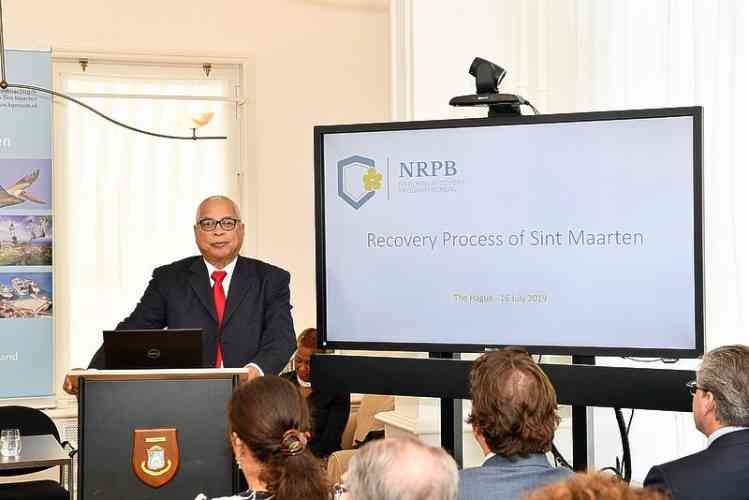 St. Maarten Steering Group representative Marcel Gumbs addressing guests at an event at the Cabinet of St. Maarten’s Minister Plenipotentiary in The Hague on Tuesday.

The Steering Group representatives confirmed that decisions will soon be taken regarding the reconstruction of Princess Juliana International Airport (PJIA). Overall, they were positive about the reconstruction process as financed through the Recovery Trust Fund, with 500 million euros provided by the Dutch government and managed by the World Bank.

“The Trust Fund is moving along very positively. Many people would like to see things go much faster. What I have learned is that we need to take time in order to achieve things the right way, the correct way.

“Because some people in St. Maarten society are negative, regrettably because of the social media, the impression is sometimes created that nothing is happening. However, a lot is happening.

“Of course, I would like to see everything repaired as quickly as possible, including the airport [PJIA – Ed.], but we are getting there. We are rebuilding it bigger and better and stronger,” said Gumbs.

Gumbs said there were also positive stories to share. “There is a sweet part of this whole journey. We have a project running that some negative people do not even want to pay attention to, [like] a training programme for 1,100 people who were unemployed. These people are going to school to study how to be electricians, how to be builders, masons and cooks. They can now provide for their families and they have medical insurance,” he said.

Weekers elaborated on the Steering Group’s workings. “Most of our time goes into pushing and pulling to get things going. We discuss the hurdles and obstacles. Sometimes it is red tape, sometimes external parties don’t move as we would like.”

“We want to get things done, but everybody has their own interests, their own timing, their own bureaucracy and own rules. It takes a lot of our time to get everybody on the same page to move things forward. We are very close to financing construction of the airport, but it is a lot of pushing and pulling. People work tirelessly,” he said.

Sayed said that lack of manpower is an obstacle for reconstruction. “Similar to many other islands in the Caribbean, there is a huge issue with capacity in St. Maarten. If people say that things are going too slowly, it is not because people are not working 24/7, but because there are not enough people on the ground to do it.”

He also said that during a meeting of the Steering Group in The Hague this week the decision had been taken to increase the role of national and international non-governmental organisations (NGOs). “The decision was re-enforced … to bring in more local and international NGOs and organisations, such as the United Nations (UN). You will hear news about that during the coming months,” he said.

Sayed said this did not mean that St. Maarten’s National Recovery Programme Bureau (NRPB) was not doing a good job. “The bureau is playing a fantastic role at the implementation of the many projects.”

Smith represented the St. Maarten government at the event at St. Maarten House and in the meeting of the Steering Group. He lauded the work of the World Bank.

“I was very impressed by the passion that representatives of the World Bank have for St. Maarten. They asked what they could do and how they could get the projects going, how we can adjust and adapt projects that do not meet the criteria. Meeting people who care was an excellent experience. I can give St. Maarten the positive news that the projects are in good hands,” Smith said.

The gathering was also meant to get Steering Group members and World Bank representatives in contact with people who want to contribute, said Wuite.

Persons who attended the event were also able to view scale models and drawings of hurricane-proof buildings for St. Maarten that were designed by students of Delft Technical University.