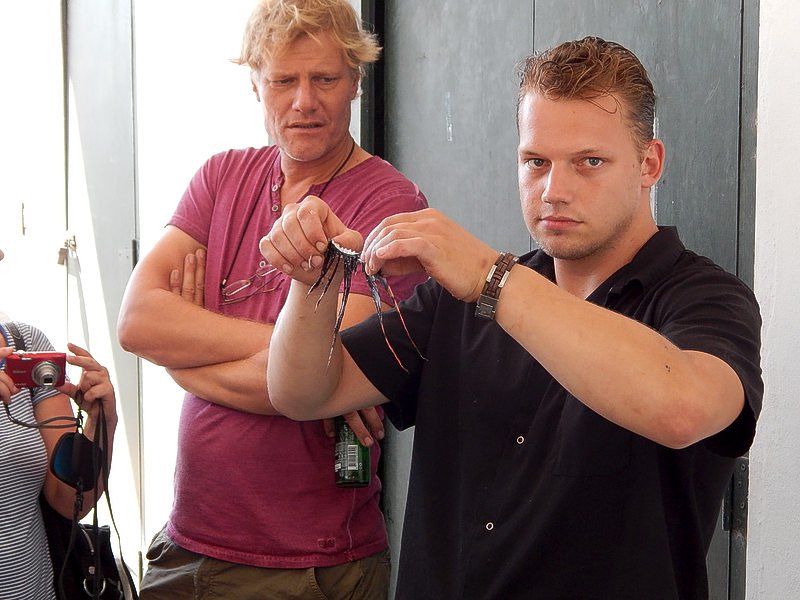 Johan Stapel from CNSI and Mishka van Dijk displaying the poison from the lionfish.

ST. EUSTATIUS–St. Eustatius National Parks Stenapa held its annual Lionfish Fry at the Gallows Bay office, on Good Friday, April 14. Attendees were allowed free tastings of lionfish served in various fashions such as baked, curried, in soup, and in other forms. The event also featured talks, demonstrations and a Kids’ play and gaming corner.

A demonstration showed how to safely fillet lionfish, remove the poisonous fangs and prepare the fish without getting stung.

Stenapa has been culling lionfish since 2010 and aims to have it featured on the menus of Statia’s restaurants and hotels. Lionfish is an invasive species that eats juvenile fish and multiplies quickly, thus creating monocultures in sensitive coral reef ecosystems in the Caribbean.

Stenapa volunteer Mishka van Dijk, who is a new cook at the Old Gin House, and Marine Park Ranger Mervina Redan demonstrated some techniques in preparing lionfish for consumption.

Marine Park Director Clarissa Buma said that in total 105 people showed up to taste the lionfish and that along with Stenapa staff and interns/volunteers, there were 120 or more present at the event. “We had not expected so many people, but it was a huge success,” she said.

The gathered crowd was very interested in the display, asking many questions of the demonstrators and even offering suggestions as to dishes featuring lionfish that could be added to the fare offered by the island’s many restaurants and hotels, especially on Karaoke Nights.