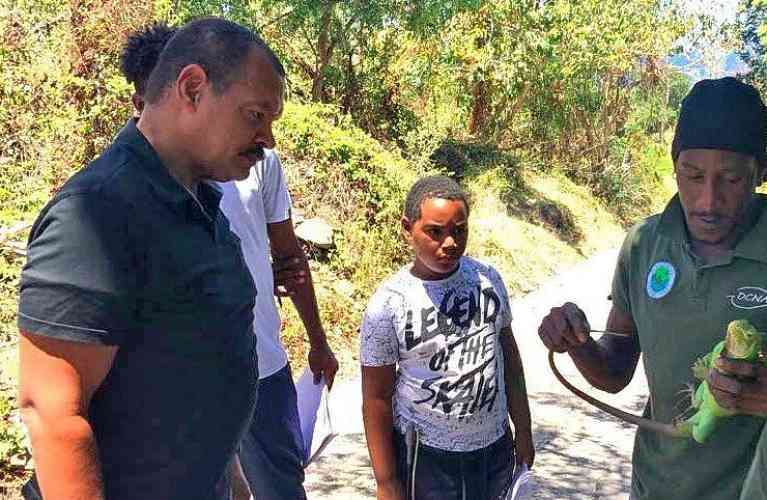 Stenapa ranger (right) checks out the tag on a young native iguana.

ST. EUSTATIUS–The hills of St. Eustatius were alive with the sound of ranger patrols on Saturday as part of a day to pay respect to the native Lesser Antillean iguana, organised by St. Eustatius National Parks Stenapa.

Children on Statia are probably the best ambassadors when it comes to creating awareness. Their attention was clearly drawn to iguana face painting, drawing competitions, games, drinks, information booth and setting off to the hills to be a ranger for a day. That was the fun side.

The interesting aspects were delivered by presentations mainly from Stenapa Director Clarisse Buma and from her team of iguana experts. Their message was clear: “Save our native iguana at all cost.

The Lesser Antillean iguana is the largest land animal on the island and spreads seeds. Without the iguana, Statia would not have so many fruit trees.

However, this native species is threatened – not anymore for its presence at dining tables as it is forbidden by law to kill or harm them, but by the invasive green iguana which has swept through the Caribbean region from Latin America.

“We only have an estimated 400 to 600 native iguanas left on Statia,” Buma said. “By September, we expect that this wonderful, yet unfortunate creature will be put on the list of critically-endangered animals, which is the last phase before it becomes extinct in the wild.”

The reasons behind the success of the invasive reptile are not hard to find. “Our native female iguana lays just 30 to 40 eggs a year, mostly in the hills, The Quill and the cliffs of our western slopes. Only a very few eggs and their eventual occupants survive cats, rats, dogs and road hogs of the human variety,” Buma stated.

“The invasive green iguana with black bands on its tail is sneakier in its mating and egg-laying strategy. It will mate with our beloved native iguana to create hybrids and thus weaken the gene pool. We found such a hybrid in March last year and another as recently as last month. The green variety will also lay as many as 70 eggs a year.

“Whereas our native iguana is happy to occupy the sunny side of trees and shrubs, the green iguana really does believe the grass is always greener on the other side. Without respect for any passport formalities, this bohemian beast will stow away and jump ship at the nearest port. Once on Statia soil, it soon finds a foothold and becomes a pest.”

Buma admits that the seafaring ambitions of the green iguana are a regular source of sleepless nights for her and her rangers. After having received a phone call from the harbour authorities in July 2016, her rangers caught such a ship-jumper in the harbour area and quickly dealt with it. The ticketless animal arrived in concrete blocks on-board a ship from St. Maarten.

Statia is not the only island that is fighting to protect this iconic reptile. Buma explains that the Lesser Antillean iguana is almost extinct on Anguilla where the green iguana has taken over. “The last pure individuals there have been rehoused to the sanctuary of Prickly Pear island.”

The future for Iguana delicatissima is not too bright. Buma would like to see its population reach as many as 5,000 individuals on Statia.

“Breeding and feeding programmes are very difficult. Unlike its prolific competitor, our native iguana is a nervous creature that really needs an injection of new genes. This could be achieved by introducing Lesser Antillean iguanas from St. Barths or Dominica. The best we can do is to urge the Statia community to stay on watch. If anybody finds an invasive iguana with black bands on the tail or a native iguana that needs our attention, Stenapa should be contacted immediately,” Buma advises.