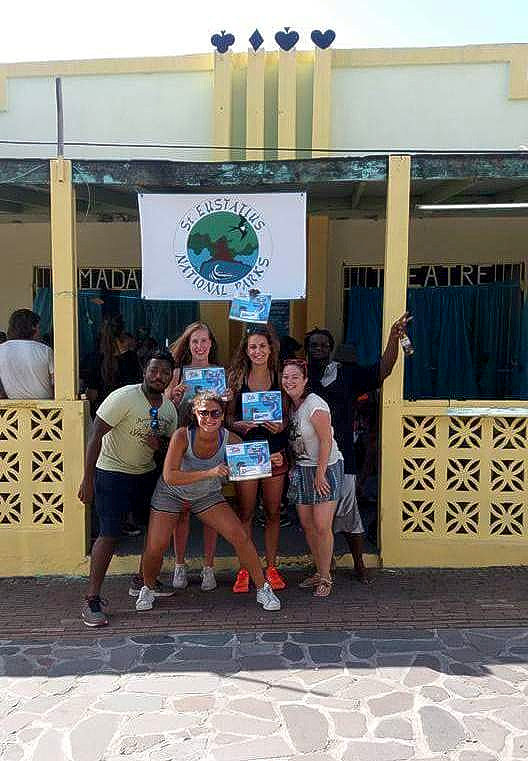 STATIA–Shark Week got off to a roaring start on St. Eustatius with a highlight being the Amazing Shark Race held on Sunday. The CNSI Blue Team 2 won the race to the glee of members Kimani Kitson-Walters (leader), Laura Stengel, Clara Gepner, Masru Spanner and Nadia Maruschak.

The other four teams in the race were SEPS – Port Services team (red team), MBO team (purple), Daniela Richardson team (yellow) and CNSI Green Team. The race started with instruction given at the Office of St. Eustatius National Parks Foundation Stenapa in Low Town and ended at Shark Week Headquarter at Charlie’s Place on Fort Oranjestraat.

Shark Week officially opened on Saturday with Environment Commissioner Derrick Simmons cutting a symbolic ribbon. He said, “We as human beings have come to the reality that it is our environment and we have to work together to sustain the planet. We only have this planet and there is no room for playing games.”

Public awareness about sharks and environmental conservation is one the goals of Shark Week. Stenapa education outreach officer Hannah Fairley is conducting most the fieldwork for the week.

The Shark Week Film Night, featuring “Shark Tale” will be held in Super Burger starting at 6:30pm on Friday, June 9. The evening will start off with the announcement and premiere of the winning video from a science class of Gwendoline van Putten School.

On Saturday, the Shark Week will conclude with a Closing Street Party at the Stage starting at 7:00pm. The Jam Boys band will perform live. Food and drinks will be on sale. The Shark Week raffle will be drawn throughout the week.