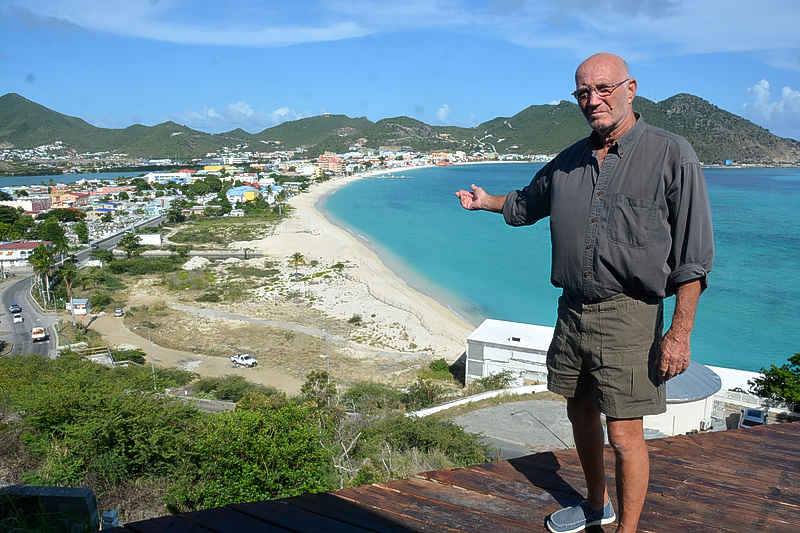 GREAT BAY–Steven Johnson, who lives in the vicinity of the location where the Planet Hollywood St. Maarten Beach Resort will be built, has filed a request with the Administrative Court for the nullification of the permit for the construction of the fourteen-to sixteen-storey all-inclusive resort with 452 rooms, a casino and a beach club with facilities, which was issued by Minister of Public Housing, Spatial Planning, Environment and Infrastructure VROMI Egbert Yurendy Doran on July 10, 2020.

The injunction, which will be heard by a judge on October 9, follows a previous case which was heard by the court in February. In these summary proceedings a permit for the construction of the resort, which was granted by a ministerial decree of April 9, 2019, was annulled by the court, as it did not meet the legal requirements.

In the new injunction filed against VROMI, Minister Doran and director of permits Charlon Pompier, Johnson, who is a resident of Little Bay Road, is calling on the court to declare the new permit granted to developer Balaclava NV null and void, as he claims that the permit was issued in direct contravention of existing administrative laws.

This illegal act represents a “clear and present” danger to the local community and endangers his life and property, the plaintiff states. He is calling for the court’s intervention to protect him and all others who reside in the immediate surrounding area of the to-be-constructed resort.

According to Johnson, who has been a St. Maarten resident for more than 20 years, the new permit should be shredded to pieces, because if the developer had wished to proceed he should have presented a completely new permit application, including the required “true” information, specifications, plans and “accurate” engineering data to support the new application, all of which was previously missing from the original application.

“These omissions and failures were the very reasons that the first permit failed to pass legal scrutiny,” Johnson states in his petition to the court.

This would, by law, also require a new public review and objection procedure to preserve the rights of nearby residents to protect themselves and their properties, but this opportunity was never offered to the public at large before the new permit was issued in July.

Johnson claims that significant engineering data and plans that defined the proposed construction in any meaningful sense were missing, thus granting the developer “illegal licence to endanger the nearby residents with a shoddy design and construction techniques proven to be prone to failure and destruction in the routinely-occurring bad weather that is common in this environment.”

According to the plaintiff, VROMI has simply modified the original permit, using the same unique identifier as the “flawed and failed” first permit, “under the flawed and illegal assumption that a simple review of the existing data rehabilitates the original permit and allows it to be reissued without any public review or objection.”

Johnson “vigorously” disputes this, also because in his view the developer’s claims concerning the structural standards, materials and type of construction are false.

The proposed construction of the resort will be more than 70 metres (200 feet) high, making it the tallest coastal building ever constructed in St. Maarten which will tower over all surrounding residential properties, including the Lt. Governor’s house. The land upon which the project is proposed is only some 40 metres from Great Bay.

“If the project is allowed to proceed, these conditions dictate the most rigorous and advanced structural engineering approach and the most highly developed construction techniques on earth in order to create a structure that will withstand the category-5 storm loads as both the developer and minister claim and still protect the residents from consequential damages,” said Johnson.

Yet, in supporting documentation provided by the minister, the engineers claim only category-3 wind loads as the basis for their calculations and offer conflicting specifications in other sections. Therefore, Johnson demands that any permit that may ultimately be issued specify “in precise engineering terms” the required “loads and stresses” in the building design to prevent damage and injury to any surrounding property or resident.

Johnson alleges that VROMI and Minister Doran are acting “more as an advocate” for the developer than for the residents and taxpayers whom they are sworn to protect. To support his claims, he is requesting that the court take note of the “historical record and unrefuted historical facts of VROMI’s past failures on this very property and others like it.”

In the past 15 years Johnson has been living in his home above the former Great Bay Beach Hotel and Casino he claimed VROMI has granted various and numerous permits for construction and alteration of the structure.

“In each case and at no time were VROMI inspectors ever observed on site doing the requisite inspections of the work that they had authorised. As a direct result of this negligence, in each major storm that passed during that period [the hotel – Ed.] shed pieces that would cause consequential damage to the surrounding properties and the environment.”

Johnson said that in 2014 Tropical Storm Gonzalo had caused roof failure at the resort which caused US $50,000 in damage to his house. During 2017 category-5 Hurricane Irma the resort’s roof, which “supposedly” had been inspected and approved by VROMI failed “catastrophically,” and caused damage to his house in excess of $100,000, as well as significant similar damage to many other surrounding properties.

Johnson says that in Irma’s aftermath it was noted that “every single building” in St. Maarten that was built with a “steel frame and cladding” type of construction, including VROMI’s own “Yellow Building” on W.J.A. Nisbeth Road, had suffered damage which turned the cladding into unguided missiles of destruction.

“Yet, knowing this to be true, VROMI saw fit to use the first permit for this project that claimed concrete construction, while the “discredited” engineering report that accompanied the application specified steel frame/cladding type of construction.

“VROMI was perfectly happy to ignore the lie put forth by the developer in the application [for a permit] and then allow a construction technique that had been conclusively proven … to be completely inferior and unsuitable for this environment in any and in all respects, never mind on a 14-storey building in a densely populated area, a stone’s throw from the ocean.”

Johnson claimed he could cite 100 instances that demonstrate VROMI’s “laissez-faire” culture that has allowed inferior construction to routinely occur. “This is demonstrated year after year when storms damage and destroy the same buildings over and over again because VROMI allows them to be reconstructed to inferior standards and never adequately inspects what or how anything is actually being built. It happens so often as to be the rule rather than the exception.

“Even though there are perfectly acceptable standards that exist that are commonplace elsewhere and that would be directly applicable in this environment, VROMI continues to claim that no standards or codes actually exit here,” he said in stating that he does not seek to reinvent VROMI but only acts with a “purely personal proactive self-defence motive” in filing this case.

He objects to the lack of any controlling language in the permit that precludes the developer or his agents from changing the design, construction, and materials.

“We don’t have nearly enough inspectors to inspect what is going on even now. There is no way we will be able to inspect that project. What you [plaintiff] might do is act as a ‘mystery shopper’ and sneak onto the site and if you see anything wrong you can give us a call,” Johnson quotes Pompier as stating. In response to this statement by the director of permits, Johnson is calling on the court to demand daily inspections.

In Johnson’s opinion the installation and certification of each and every room, door and window at the Planet Hollywood resort needs to be inspected and validated.

He also pointed out safety concerns for the hundreds of hotel guests in case of an emergency, stating that the Fire Department only has ladder equipment capable of fighting a fire up to the fifth floor.

Furthermore, the construction and operation of a hotel of such “massive” size would cause noise and traffic in a densely populated area, constituting “an unacceptable nuisance by any standard.”

Johnson said Great Bay Beach Resort had been roughly 25 per cent the size of the newly proposed resort. “The noise from the pre-existing hotel’s outside entertainment regime made life virtually unbearable for everyone nearby. Plaintiff can only imagine what the new proposed mega-complex will generate in noise and traffic.”

He said this will have negative effects on the local property values as well as the quality of life of all surrounding neighbours. This towering hotel building represents a danger to the community and destroys “any meaningful quality of life for those individuals that will forever live in its shadow,” Johnson stated.