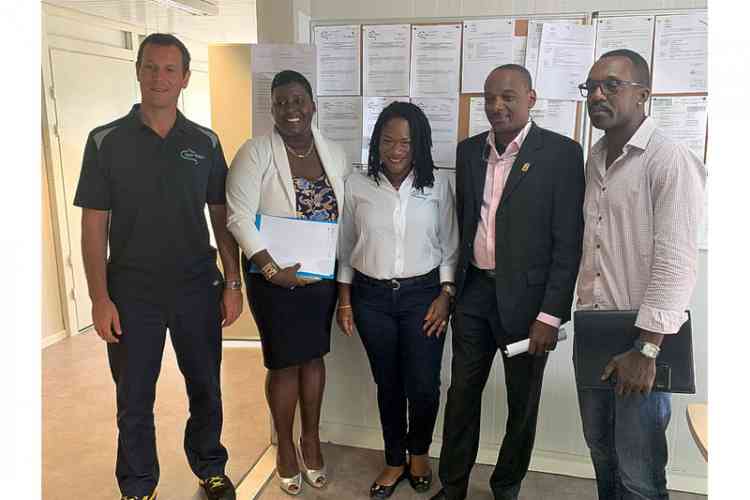 MARIGOT–Vice-President of the Collectivité Steven Patrick briefed the press Monday on the current situation with urban planning controls since Hurricane Irma and gave updated figures on the activities of the Directorate of Spatial Planning and Urban Development.

He said six officers are assigned to the urban planning police among 17 officials in the Planning and Urban Development Department, and 680 controls had been carried out since September 2017, including issuing 46 written warnings of which 39 were sent to the prosecutor’s office.

There were 90 controls in the Red Zone of the Natural Risks Prevention Plan PPRN and 984 urban planning certificates were drafted which he said reflects an encouraging economic recovery.

As a reminder, the urban planning police, in addition to monitoring, also have a role to play in providing support and advice to the population. Even if there are not enough staff, the 17 employees of the Planning and Development Department are at work, all cases are investigated, and no cases are pending to date. The analysis of requests is carried out in complete transparency via allocation committees and the opinion of the Executive Board.

On the “50 pas geométriques”, Patrick said there is a willingness to solve this issue and to accelerate the regularisation of titles when possible.

Regarding cleaning up dangerous areas during the hurricane season, the Collectivité issued 25 formal notices in May/June summoning some property owners to remove dangerous debris from their property (sheet metal, construction site rubble, etc.).

The Urban Planning Police’s inspections are continuing, with a primary role of advising and supporting landowners. The objective is to approve what is approvable and to help the population avoid certain practices. There is a willingness to update the Plan Occupation de Sol (POS) quickly, to adapt it to certain realities and modify certain restrictions that are now obsolete.

An alternative plan to counter the current PPRN by integrating recommendations adapted to the realities of St. Martin is in progress and involves the population in this study. Integrating economic and tourism development is considered very important.

On the “carbets” of Orient Beach, the Collectivité has installed the common infrastructure (electricity, water, sanitation). The plan is also to install four mini-shops and two water-sports within two weeks. The temporary occupation permits AOTs are assigned and proprietors have started work on their individual businesses.

The development of the market square and new lolos in Marigot will be ready at the beginning of October. AOTs and locations have already been assigned. The work is ongoing.

“We are gradually moving forward to address a legacy of past urban planning and often complex issues,” Patrick stated in conclusion. “We are aware that the State and the Prosecutor’s Office would like to move faster, but we must take into account the historical context of St. Martin. We are moving in the same direction, but at a different pace.”