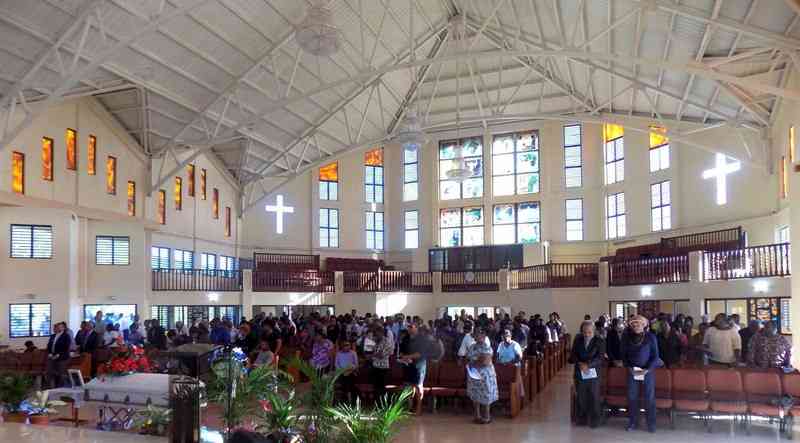 ST. EUSTATIUS–“Jack-of-all-trades” Steven Randall Spanner was laid to rest on Friday afternoon. The funeral service was held at Seventh-Day Adventist Church in Newton Pasture. Spanner died on October 19, while spearfishing at sea.

Former Island Councilwoman Adelka Spanner gave the eulogy for her brother. “Steven was loved by all of us and he will be greatly missed by his second wife Regina Spanner-Herbert, his five children from his first marriage, his eight grandchildren, three brothers, eight sisters, his 81 nieces and nephews, his 155 great-nieces and nephews, extended relatives and friends,” she said.

Spanner started working as a telephone operator at Fort Orange. In the early 1970s, he went to work with a company that came to lay asphalt at F.D. Roosevelt Airport, where he learned to operate heavy equipment. He moved with the company to help with the expansion of Princess Juliana International Airport in St. Maarten.

He returned to St. Eustatius after 1973 to work with Enica in building the first set of low-income housing at Golden Rock village, and the Zeelandia Road Project later. When Charles A. Woodley Pier was built, Spanner worked with the German company building the pier. He also worked on the Claes Ghut project as a heavy machinery and equipment operator.

To maintain his family, he went to work with the Island Government as a heavy-machinery operator. He later became a school bus driver at Lynch Plantation/Seventh-Day Adventist School, where he was affectionately called “Uncle Steve.”

His sister described her brother Steve as a Jack-of-all-trades. “From a very young age, Steve was the type of child that experimented on anything he got his hands on. He would get in trouble for demolishing toys, bicycles and radios, but he always figured out how to put it all back together on his own. That is where he learned to fix cars, motor engines, et cetera. Because Steve was self-taught, he was a very gifted mechanic, who did upholstery work, which included car interiors and exteriors as well as boat sails for many boats on the island and abroad,” she said.

Spanner also was a farmer and cattle owner from a very young age, but his greatest love and passion from childhood was the sea. He would go fishing, diving or snorkelling every day, whether the sea was rough or calm, sometimes by himself or with his childhood friends. Regardless of how many punishments he received from his mother, he would continuously return to the sea.

He grew up fishing with his older brother Maxwell and many other local fishermen. Any time there was a need for qualified divers, Steve Spanner would be contacted.

“Steve was known as one of the best and fearless divers on the island,” his sister Adelka said. With the traditional jack sail Steve would be assigned to look for the jacks, as well as clearing the net if it were to become tangled at the bottom of the sea. In his free time, Steve would haul fish pots, dive for lobster, whelks or go spearfishing.

“Unfortunately, on Friday, October 19, 2018, he lost his life doing what he loved. Only God knows what happened that unfortunate day. I know that he is safely in the hands of the master who loves him best,” Adelka Spanner said.