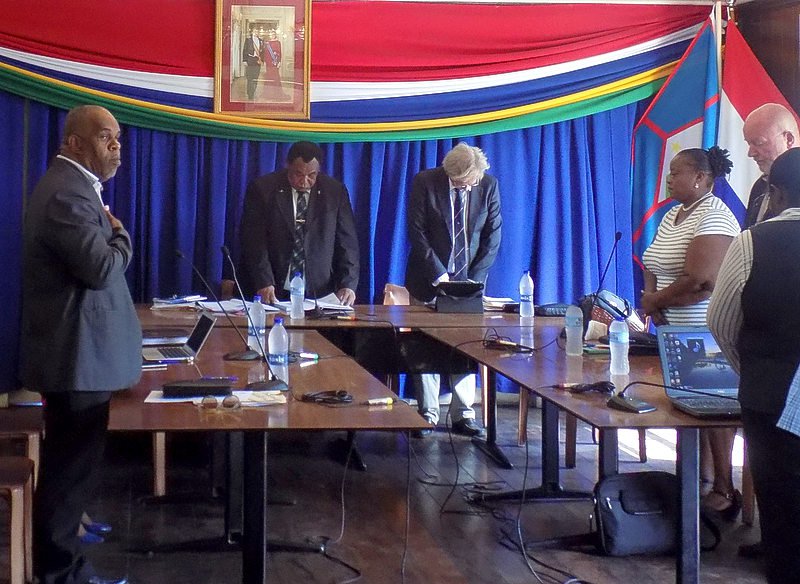 ST. EUSTATIUS–An Island Council meeting scheduled for Monday morning met the same fate as other meetings called by the opposition during the summer recess.

Also, this time the governing Progressive Labour Party (PLP) voted against the agenda submitted by Democratic Party (DP) to discuss the Island Government’s financial policy and the position of Commissioner of Finance Astrid McKenzie-Tatem.

With Island Councilman Reuben Merkman of United People’s Coalition (UPC) still on vacation abroad, Acting Island Governor Julian Woodley called the meeting to order. As the agenda points were announced, PLP Councilman Clyde van Putten asked to put the agenda to a vote, in keeping with the Rules of Order.

The same procedure was followed in the past three Island Council meetings, and also this time the outcome was not any different. With DP members Adelka Spanner and Koos Sneek voting in favour of the agenda, and Van Putten and his PLP colleague Rechelline Leerdam voting against, the votes tied once more, after which Chairman Woodley said the meeting was closed.

The Island Council meeting was rescheduled for Thursday, August 11, with the same agenda points. This time, it is expected for Councilman Merkman to be present as he is expected to be back on the island.