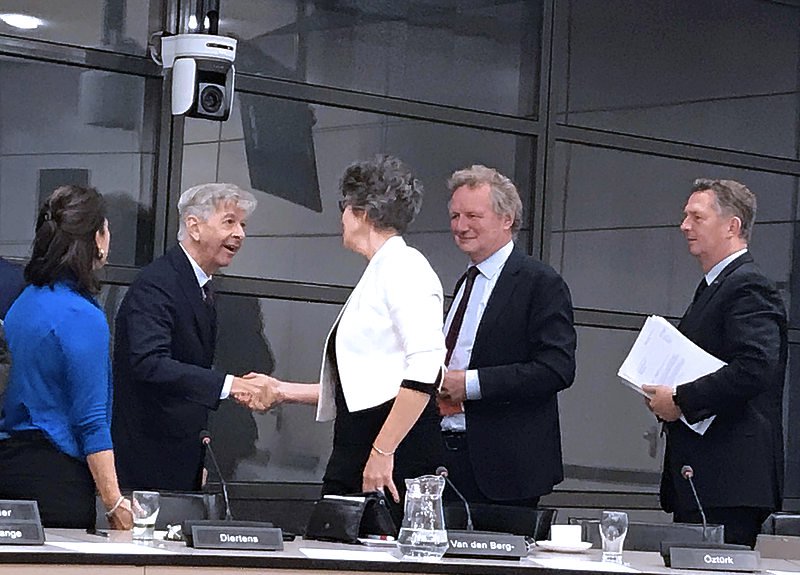 THE HAGUE–Members of the Second Chamber of the Dutch Parliament have taken note of the remarks of St. Maarten Prime Minister William Marlin alluding to the Dutch reconstruction assistance. Some Members of Parliament (MPs) responded with surprise, others with total disgust.

MPs André Bosman of the liberal democratic VVD party and Ronald van Raak of the Socialist Party (SP) accused Marlin of “playing political games at the expense of the people.”
They expressed great concern after The Daily Herald published an article on Tuesday indicating that the St. Maarten Government was rejecting certain conditions of the Dutch Government in the talks to establish a comprehensive reconstruction fund after Hurricane Irma and that this stalling by Philipsburg might impair the much-needed assistance from The Hague.
“What does Marlin exactly want for St. Maarten?” said Bosman, who called it “bizarre” that the St. Maarten Government had not as yet filed an official request for assistance from the Netherlands. “It is obvious that certain people don’t want anyone keeping an eye on the spending of Dutch taxpayers’ money to reconstruct St. Maarten.”
“It is painful that political games are being played at the expense of a population that is still feeling the full impact of this horrible hurricane on their daily lives. St. Maarten’s reconstruction should be on the front burner. Now is not the time for political games,” said MP Ronald van Raak.
Bosman concurred that political games were out of place. “This will be detrimental to the assistance to people in need.” He said that “surely” The Hague would not just “send the money” and that a solid system of checks and balances on how the reconstruction funds were spent had to be in place.
Van Raak: “Everyone knows that assistance has to come from the Netherlands, but people also understand that the Netherlands will not just transfer several hundred million euros to the island without knowing for sure that this money is well spent and ends up in the right places.”
Proper accountability is something the St. Maarten Government should also want, said Bosman. In fact, this is what the St. Maarten people have been asking for, he added. “People have been imploring not to just send the money. I don’t get why the St. Maarten Government doesn’t want this. That is what bothers me the most about this.”
According to Bosman, the thing that should be first and foremost on the minds of the St. Maarten members of Government is the best interest of the people. “That is what you do if you are a politician who truly looks out for the people,” he said. He was critical of politicians who were busier with their own agendas than working on behalf of the people.
MP Joba van den Berg of the Christian Democratic Party CDA emphasised that effective and efficient spending of tax money was a clear condition to become eligible for Dutch funds. “This is not specifically applicable to St. Maarten, but it is a general Dutch rule when spending tax money: no funding without proper reporting and accountability,” she told this newspaper.
According to Van den Berg, integrity of the Government administration was the key to achieve effective allocation of money and the providing of accountability. “The people I have spoken with so far were all very aware of that and they were supportive. I sincerely hope that the two governments will come to an agreement for the benefit of the entire St. Maarten population,” she said.
MP Antje Diertens of the Democratic Party D66 said in a reaction that parties should focus on constructive cooperation, as this was more effective than squabbling. “Let’s ensure that everyone focuses on a good cooperation,” she said. She added that the Dutch assistance also brought with it responsible, solid accountability.
During a debate with caretaker Minister of Home Affairs and Kingdom Relations Ronald Plasterk last month, Diertens urged the Minister to not only look at the money, but also at working together with on an island level, making use of local expertise. “That is also an important part of a good cooperation,” she said.
Diertens pointed out that Prime Minister Marlin also had a role to play in achieving this cooperation by engaging in constructive talks with the other countries in the Kingdom – Aruba, Curaçao and the Netherlands – “for those are his partners.”
The MPs agreed with the demands of the Dutch Government in the talks with the St. Maarten Government to arrive at the funding of a structural reconstruction programme: the establishing of the Integrity Chamber and the securing of additional Dutch Royal Military Police (Marechaussee) to beef up border control.
“The Netherlands is not taking measures with the aim to meddle in local affairs, but it is doing so in order to give St. Maarten a future. There can be no future with corruption and rampant illegal immigration,” said Van Raak.
In the absence of an agreement with Philipsburg, it is highly likely that the Kingdom Council of Ministers will decide to invoke article 51 of the Kingdom Charter. This article states that a General Measure of the Kingdom Government can be issued when an entity in Aruba, Curaçao or St. Maarten does not (sufficiently) comply with its tasks.
“Invoking article 51 is certainly an option, for this needs to be addressed,” said Bosman, who expressed the hope that the St. Maarten Parliament will decide to take the lead in resolving the pertinent issue of reaching an agreement with the Dutch Government about the reconstruction fund. “I hope that the Parliament will say, ‘enough is enough, let’s get this done,’ and that it will take over the initiative from an unwilling Government,” he said.