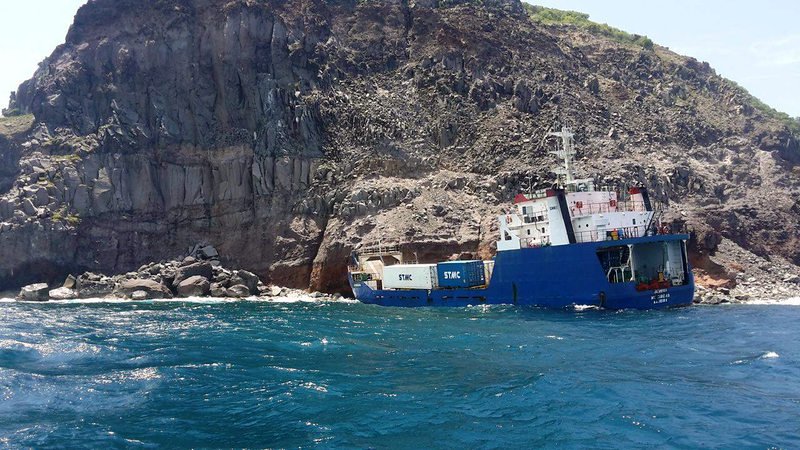 ST. EUSTATIUS–No fuel is leaking from the cargo vessel MV Sirena which is stranded near Cocoluch Bay on the northernmost tip of St. Eustatius. The coral reefs in the area where the ship is stranded do not seem to be damaged or disturbed, according to St. Eustatius National Parks Stenapa. “At present the vessel is still stable, although open to waves and winds in that corner of the island,” Statia Government Information Service said Tuesday afternoon in a statement.

Insurance company P&I have stepped in and taken responsibility of the entire process to salvage the ship which is owned and operated by French-based companies Groupe Jacques Gaddarkhan and SMMI. The ship is registered in Madeira.

The ship has been sealed off to prevent any fuel from leaking into the ocean. The next step will be to empty the ship’s fuel tanks. It could not be confirmed whether this process has yet started.

The ship had seven crew members on board when it got stranded on Statia while sailing from the Port of Galisbay in French St. Martin to Martinique. No one was hurt when the Sirena hit the rocky coastline on which it has been resting since late Thursday evening.

The six crew members of Romanian nationality and one from Martinique remain on the island in connection with the investigations into the incident, which are being carried out by local and national authorities, it was stated on Tuesday.

The maritime authorities are coordinating the removal of the MV Sirena with the owners, the insurance company and the Classification Society, a non-governmental organisation that establishes and maintains technical standards for the construction and operation of ships and offshore structures.

“Work for the removal of the MV Sirena is progressing fast and being monitored by local maritime authorities. Plan for salvage/removal of the vessel had been submitted and approved. The salvage contractor is preparing to mobilize their assets to start execution. During the weekend of August 13 through August 14, assessments have been carried out by Classification Society representative of Bureau Veritas,” Statia Government Information Service said in a statement on Tuesday afternoon.

Stenapa’s Marine Park Manager Jessica Berkel said marine rangers were sent out Monday to check on the marine environment near the Gibraltar/North Point dive site in the Northern Marine Reserve. The area is known as a favoured location for stingrays and sea turtles.

The assessment dive showed no damage to the reef with the ship sitting tightly on submerged boulders on the National Park’s boundary right next to the reef, Berkel said. “We will keep on monitoring the situation closely in the coming days,” said Berkel.

The MV Sirena is expected to be salvaged and removed from its location within seven to 10 days. “All relevant persons involved have been informed so the necessary steps can be taken care of to get this operation underway,” said Harbour Master Austin van Heyningen.