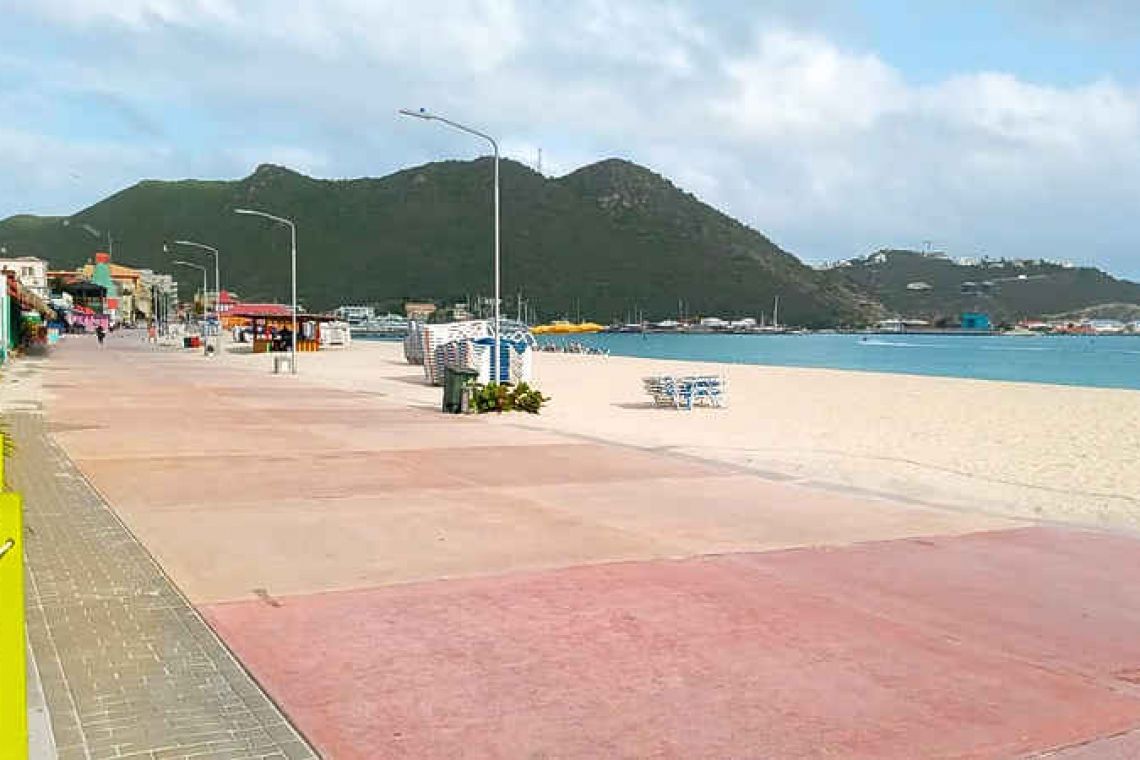 PHILIPSBURG–Although signs of recovery from the COVID-19 pandemic crisis seem visible in the occupancy rates for April, St. Maarten Hospitality and Trade Association (SHTA) reminds that for use as an economic indicator, it is important to compare not just the occupancy rate, but also the room count to St. Maarten’s pre-Hurricane Irma timeframes.

SHTA said that from a mathematical point of view, higher occupancy rates are more easily achieved when destination room counts are lower, and stand for fewer visitors when compared to a larger room array. St. Maarten’s April (72 per cent) and first quarter (73 per cent) occupancy rates would mean 60 per cent and 61 per cent occupancy respectively when compared to St. Maarten’s 2017 room count. Using this as an economic indicator, the situation is less than rosy.
In April 2017, occupancy was 79 per cent. This means that St. Maarten’s stayover economy needs 19 per cent growth to recover and get back to its pre-Irma situation. This gap does not include the also-important cruise industry, which also lags due to its reduced capacity.
The good news is that occupancy rates seem to have surpassed those of April 2019 when recalculated for the room count of that month.
According to the World Bank, in 2016, tourism directly accounted for 45 per cent of St. Maarten’s gross domestic product (GDP) and 73 per cent of its foreign exchange, driven by hotels and restaurants, retail trade, transport, yacht repair, and harbour services. Tourism income does not simply provide income to tourism companies, but indirectly to all other sectors as well, from roadside grills to supermarkets.
“When our main economic pillar is flourishing, government will also earn more from the tourism economy,” SHTA said. “With room count increasing as hotels fully reopen, beds are plenty – we now need the marketing support to reach our clients.”
With 83.6 per cent of its pre-Irma room count recovered, “beds” are no longer the problem for country St. Maarten. The question is now how to fill these beds consistently. That boils down to getting the message across that St. Maarten is the greatest place to spend your holidays (marketing), stated the association.
Before autonomy status, St. Maarten spent roughly $12 million on its marketing as a destination, including operational cost of St. Maarten Tourist Bureau (STB). With a hotel and timeshare room count of 3,315, STB’s budget for 2021 was $7 million, of which approximately only half was spent that year.
For Curaçao, with a lower room count (3,200) in 2022, government allocated $13.4 million to spend on its marketing and tourism organisation. For 9,000 hotel and timeshare rooms in Aruba, this amount is $60 million. Annualized, that is a marketing expense of $6,667 per room. For Curaçao, this would amount to $4,200 per room compared to St. Maarten’s allocated $2,100, but real $1,150 per room spent.
“Aruba is clearly more successful at attracting tourists and this success breeds success. However, with St. Maarten continuing to underfund the STB, the opposite also proves true. While St. Maarten is in the same COHO [Caribbean Body for Reform and Development – Ed.] predicament, it is also the only one hit by a hurricane prior to the global pandemic affecting the economy and is per capita more dependent on direct or indirect income by tourism,” said SHTA.
“Lower demand caused by lower St. Maarten brand exposure will also lead to lower ‘yield’ per room and ultimately impact employment. Greater demand would yield competitive prices and growth for all involved, including, in the end, greater possibilities for government. This poses a dilemma to solve for the government. Do you see destination marketing as a regular expense, or a key to stimulate an upward cycle when the greater part of the economy depends on its income?”

Conclusion: Don’t kill the goose
This week’s quarterly Expedia trend report provides a generally positive outlook for travel. After two years of being obstructed by travel requirements, consumers are much inclined to get out and spend on holidays this year. In addition, destinations blessed with beaches are considered particularly successful.
“That also means that our competing destinations have an advantage, as this demand comes on top of the removal of COVID-19 travel requirements, including pre-approval to entry, which for weeks has been the case in all former the Netherlands Antilles except St. Maarten.
“Although the health of the population should always prevail, government’s lack of action on the removal of EHAS [electronic health authorisation system], a significant stride made by many other destinations, is worrisome as it is creating a continued point of friction that can easily be removed.”
SHTA said that in the predominant post-pandemic marketing voice of Caribbean tourism, the absence of St Maarten does not go unnoticed by the vast amount of St Maarten residents and companies directly or indirectly dependent on its sole economic pillar.
“The tourism economy is not something that feeds itself alone. Aruba, that makes every room tax penny flow back to its tourism authority, provides for a relatively sustainable invention that has clearly benefited the country and people. Its 2022 performance broke 2019 records, so no COHO or pandemic excuse would apply.
“SHTA is in support of diversification efforts, but reality has it that in 2022 country St. Maarten is not diversified except within tourism. The more that we deny and undermine this the less it is able to support us. If we are not in a position to both sustain our core, and encourage diversification, we must strengthen our core until we can get to the desired level.”
According to SHTA, part of Aruba’s effective approach is that of the Aruban Tourism Authority, a public-private model, allowing for swift adaptation to tourism trends and ease of expenditure. As Aruba’s laws are in Dutch and based on the same principles, it would be an easy job for country St. Maarten to “copy and paste” this government’s independent “sui generis” model, as it brought prosperity to a sister country and the success is self-evident.
“It is up to government to decide St. Maarten’s future. The SHTA advises not to kill the already ailing goose, but nurture it back to health so it can again support the island while we look toward other revenue streams,” stated SHTA.