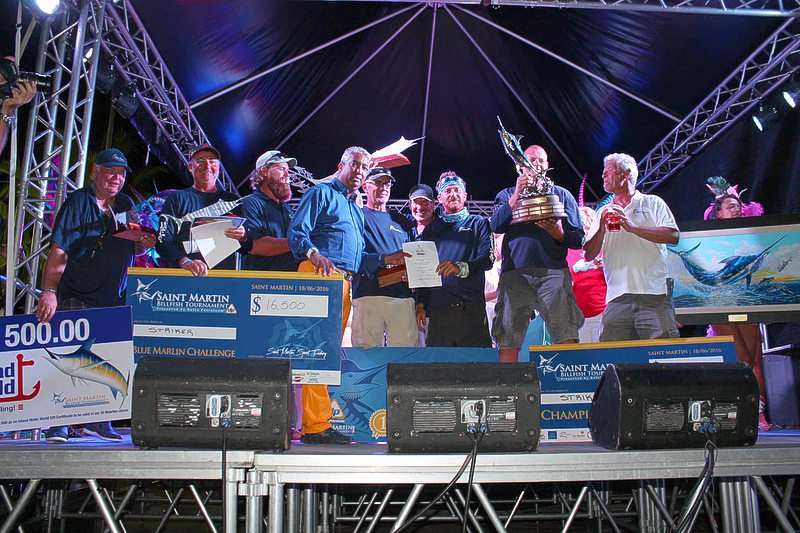 MARIGOT—The Dutch-side boat Striker enjoyed a whopping pay day on Saturday after snatching first place from under the nose of Take 7 to win the 19th St. Martin Billfish Tournament, and have their name inscribed on the perpetual trophy.

Just three points separated the two boats with Striker’s two releases (600 points) and the 403lb Marlin weighed in putting them in front with 1,003 points to Take 7’s 1,000 points. Rarely have results been so close.
After three days fishing on the open sea under a blazing sun participants were handsomely rewarded with big cheques, gifts, the all-important diesel fuel, and other goodies courtesy of generous sponsors at the awards ceremony.
No wonder the Striker crew were grinning from ear to ear. Not only did they win the first prize of US$6,200 but they also won the winner-takes-all Blue Marlin Challenge for most points, pocketing another US$16,500.
Add in the US$500 gift certificate from Island Water World, 1,000 litres of fuel from Delta Petroleum, a painting by Carey Chen, lures by Roddy Hayes, trophies by Fish Bones, and invitations to fishing tournaments in the BVIs, Antigua, and the Offshore World Championships in 2017, one could say it was definitely a good decision to participate seeing as last year Striker caught nothing.
“The conditions were wonderful, the fish were biting, and the organisation was great,” said Striker’s Captain Alan Comlekcioglu. “There was a lot less seaweed this year too so we hope next year will be as good as this one was. The timing of the tournament was exactly right.”
The crew however announced they will split their winnings and donate half to the Dutch-side sea rescue and half to the French SNSM sea rescue. Both services responded to incidents during the tournament, one of which involved an injured crewman on My Pearl.
Take 7 won the second placed prize of US$4,650 while third place cheque of US$ 3,100 went to the Antigua boat Rum N Coke which amassed 913 points.
Rum N Coke weighed in the heaviest Blue Marlin of the tournament at 613lbs winning an extra US$3,100, a seven night stay in Marina Cap Cana, in the DR, and invitation to the Cap Cana fishing tournament.
The White Marlin Challenge winner (most points) went to the boat Crank It Up, the smallest boat in the tournament, winning the crew US$7, 875.
The Best Angler prize went to Jamie Laplace from Tao Tira scoring 898 points for reeling in two Blue Marlin, weighed in at 404lbs and 494lbs.
In the Fun Prize categories, the heaviest Mahi Mahi went to One Shot for their 63lb fish. Heaviest Wahoo of 50lbs went to the boat Hangover and Heaviest Yellowfin Tuna of 49lbs to Ipamol.
In all, 28 Blue Marlin were caught and 22 of them released. Six Blue Marlin were weighed in. Seven White Marlin were released.
31 boats took part in the tournament from around the Caribbean region with 180 fishermen.