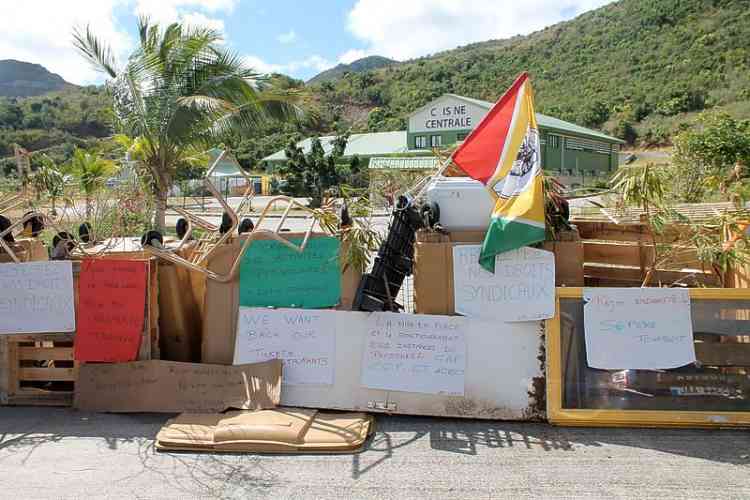 MARIGOT—Access to the Central Kitchen in Grand Case was blocked Thursday morning by strikers in the latest development of the long-running protest by aggrieved Caisse Territorial des Oeuvres Scolaires (CTOS) workers. The action prevented any school meals from being prepared for the few school canteens that are open.

Spokesperson for the Union de Travailleurs de la Collectivité (UTC) and Union General des Travailleurs de Guadeloupe (UGTG) Nicole Javois said the main issue causing the deadlock with the Collectivité is point one of the 18 grievances the union submitted; namely the 16 CTOS workers whose contracts were not renewed and who have not been paid since November 2018. She admitted negotiations were “going nowhere.”

CTOS President Pascale Alix-Laborde justified the termination of those contracts due to the “disastrous financial situation” of CTOS and the order from the Territorial Accounting Chamber to reduce employee expenses.

“We are asking for their situations to be regulated because the law permits them to be integrated in the Collectivité and the President did agree to that in a previous protocol,” Javois explained to The Daily Herald. “They are still working and that’s what we want to make clear.

“We are asking for them to get their salaries back and their nominations as stated in the protocol. In the documents that the Collectivité gave us we find that there are 83 vacancies that are on the budget of the Collectivité.

“There is a possibility of taking those workers on the Collectivité budget because the money is there, and from there when they get title, they can submit a “mise a disposition” to the CTOS.

“We are also asking on point number three that the Collectivité takes back the service of the Periscolaires (after school activities). That would relieve the burden on the Central Kitchen’s budget. That way CTOS can concentrate only on food and not on after-school activities, and reduce their expenses.”

Javois added there were some employees taken on for the CTOS between 2013 and 2014 which caused an overload on the budget, and the union wants the Collectivité to take them back for the after-school activities.

“That way the canteens can run the way they are supposed to, and again it will be a relief on the CTOS budget.”

“Parents have to understand that we are in difficulties too. We are fighting for a cause which is for better working conditions and our careers. Our career prospects have been in a critical state for a long time now.”

The unlimited strike initiated by the UTC-UGTG union began January 30 and shows no sign of ending as neither the Collectivité nor the union are willing to back down despite discussions, negotiations, and mediation attempts to try to get out of the conflict.

President Gibbs on Tuesday recorded a video clip on the Facebook page of the “Collectivité de Saint-Martin Our News” page in French and English to explain to the population the sticking points.

The Collectivité said in a release that despite the mediation efforts of the President and his elected representatives and the Human Resources Department, who have been working tirelessly for the past month to respond to demands to thoroughly reorganize the administration, and despite listening at all times with a tolerant disposition towards the strikers who have disrupted the Collectivité for several weeks, the situation remains tense.

“The union representative refuses the presence of the Vice-President Annick Pétrus, at the negotiating table,” the release added. “This situation is all the more detrimental as the Collectivité had just responded to the union’s proposal to end the conflict with a written protocol that should have been discussed today, during the meeting scheduled for 2:00pm, and which, above all, opened the door to a possible way out of the crisis.

“This protocol responded favourably to almost all the claims raised, except for claim point one, which the Collectivité and the CTOS cannot respond favourably to for budgetary reasons, and which has been explained several times. Unfortunately, the disrespectful attitude of the representative of this union prevented any negotiation on this new protocol. The meeting was interrupted.”

Gibbs said Annick Pétrus has all the legitimacy to sit at the negotiating table and has been working alongside the President and his colleagues since the beginning of the conflict to find solutions.

Asked to explain why the union did not want Pétrus at the table, Javois replied. “After several negotiations when we were nearing a solution, she kept saying on point number one that there is nothing we can do, we already told you that, and we are not changing our mind. With that negative attitude we asked from March 1 that she no longer be part of the negotiations. But we do respect her otherwise.

“She also accused us of vandalism which is something we never did. Yes, we did block Hotel de la Collectivité as that was our right as strikers. But no, not vandalism. We have to continue the strike, we are not giving up. Because it is mothers and fathers out of jobs, with children to feed, rent to pay. Those workers are already in very difficult situations with no revenue coming in.”

President Gibbs has called on the union to reconsider its position and is open to resuming discussions with elected representatives at the table to discuss the points of the protocols for ending the conflict and putting an end to the strike.