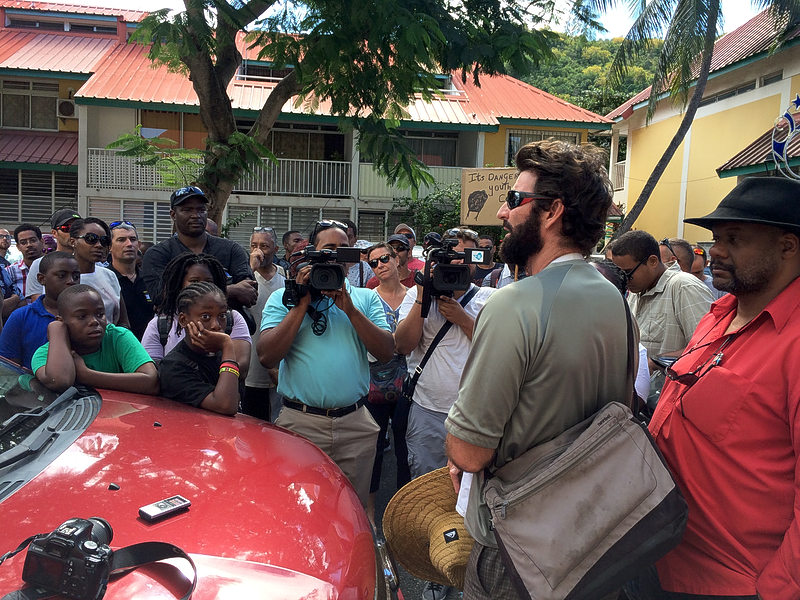 MARIGOT–Many teachers and Parents Association members took the streets on Tuesday morning to protest National Education’s proposed budget cuts that are going to affect schools in St. Martin for the return to school in September.

The protest followed some two weeks of unrest, mainly at Collège Soualiga and Collège Mont des Accords. Teachers unions are protesting the proposal to reduce the number of teachers and increase the number of pupils in a class to 30. Instead of two teachers to teach 15 each, one teacher would teach 30 pupils.

The Préfecture declined to give teachers permission to hold a protest march on a different route due to concerns of creating more traffic jams.

Teachers and parents gathered outside Hotel de La Collectivité and a delegation of 10 persons representing the teachers and five from the Parents Association was granted a meeting with the Director of General Services (DGS) and representatives of the Collectivité’s education services.

“The parents find this is totally unacceptable, as most of the students speak English and in order to educate them properly in the French language we need to have not more than 15 in a class so they can get adequate attention to learn in the right way,” said teacher Etina Mussington Arnell. “If we do not show our dissatisfaction now, the Education Ministry will implement its policy and it will be too late. We’ll have to wait another year.

“Already enough is enough. In terms of success rate, if you look at the academy of Guadeloupe it is St. Martin that is always far behind and at the bottom of the ladder. It’s not that our children are less educated or less gifted than others. It’s simply that the education system does not cater to the needs of the children.”

It was understood from the Collectivité that St. Martin will be placed in a category (reseau education plus) that will permit it to have additional means to boost the educational system by alleviating some conditions and helping the students to advance.

“The Collectivité has said it will send its proposals to Guadeloupe, but that doesn’t mean it will be accepted, so we have to stay vigilant,” Mussington Arnell cautioned.

The delegations were also received at the Préfecture and by Recteur’s representative in St. Martin Michel Sanz, who cancelled a trip to Guadeloupe to deal with the matter.

Sanz said it was not true that there will be 30 pupils per class.

“There are 100 pupils less in the sixth starting in September and in the first degree 200 less than the year before,” he said.

He gave reassurance that the provisions would be reviewed in June and promised that changes would be made if classes were reaching to the point of 28 pupils.

“We are watching this very closely,” he added.

The outcome of the meeting at the Préfecture was not known by press time.