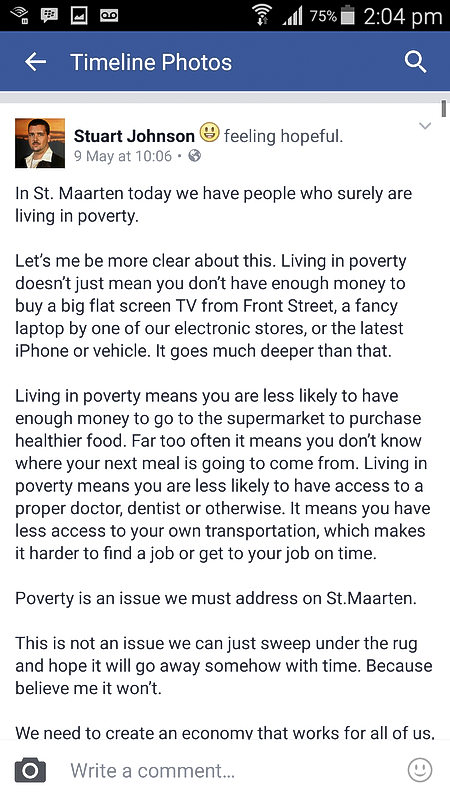 PHILIPSBURG–Stuart Johnson appears to have plagiarised parts of a speech on poverty made by US presidential hopeful Bernie Sanders, in a message on the same subject that he posted on his public figure Facebook page and signed as potential United People’s (UP) party board [President – Ed.].

Johnson, who currently holds the post of general secretary and PR officer on the UP party board, declined to comment on the matter when asked several days ago, indicating that he had a comment prepared, but would release it only after he had seen the article this newspaper has written.

Sanders delivered his prepared remarks in McDowell County, West Virginia, USA, on May 5. The entire speech was posted on Sanders’ website

Johnson posted a message about poverty four days later, on May 9. The first part of Johnson’s message appeared to have been taken directly from Sanders’ speech. Johnson replaced words such as America with St. Maarten and added words such as Front Street to localise the message. He did not say he agreed with Sanders’s ideas or otherwise acknowledge the US presidential candidate in his posting.

An excerpt from Sander’s prepared remarks reads: “In the United States today … 47 million Americans are living in poverty. … Let’s be clear. Living in poverty doesn’t just mean you don’t have enough money to buy a big screen TV, a fancy laptop computer, or the latest version of the iPhone. It goes much, much deeper than that.

“In America today, being poor not only means you are less likely to have a grocery store in your community selling healthy food, far too often it means you don’t know where your next meal is going to come from. In fact, 15 million children in America today are living in families that struggle to put enough food on the table.

The beginning of Johnson’s message reads: “In St. Maarten today we have people who surely are living in poverty. Let me be more clear about this. Living in poverty doesn’t just mean you don’t have enough money to buy a big flat screen TV from Front Street, a fancy laptop by one of our electronic stores, or the latest iPhone or vehicle. It goes much deeper than that.

“Poverty is an issue we must address on St. Maarten. This is not an issue we can just sweep under the rug and hope it will go away somehow with time. Because believe me it won’t.”