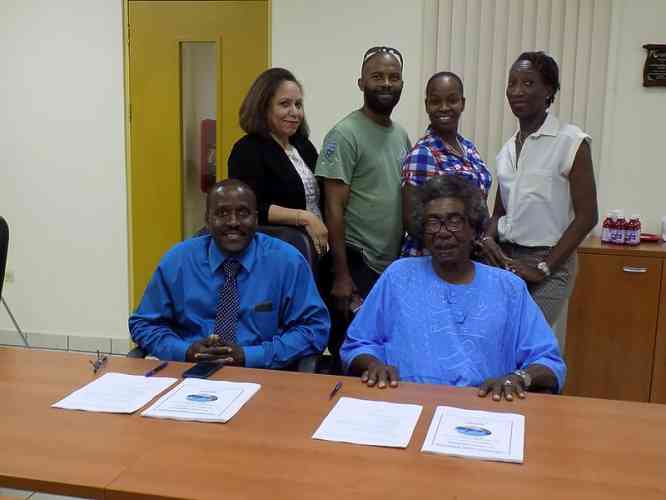 Stuco’s Chief Executive Officer Fred Cuvalay said the company is looking forward to working together with the unionised workers and other staff in enhancing the performance and image of STUCO, “throughout this period to the benefit of the service we provide to our customers.”

He said the negotiations for a new CLA “took a long time. However, we found common ground and for this we’re happy.”

Cuvalay said he is “happy” they reached to this point, and said he is looking forward to the “continued good relationship with the union, and certainly with the employees.”

He wants to dispel the notion that he is difficult to approach, and stated that if there is an issue among staff they want to discuss, they can just come to him. “An open and mutual exchange is in the best interest of the company,” he said.

Stuco shop stewards Myrna Rivers and Alex Arndell were present when the new CLA was signed.

For Arnaud, this was the first time he signed a CLA as union representative. “I came on the train late, but despite all the ups and downs we’ve had, I do not want any confrontation between the employer and the union, because somehow we have to work together, whether we like it or not…There is always a solution if you try to do it amicably. Hostility only creates stand-offs, and the members are the ones that will suffer. From the onset it was my stance that no matter however difficult it is, we will sit down and talk in a civil manner, because that is the most important thing to make a breakthrough. I’m glad we have reached this far,” he said.

Stephen was also pleased with the outcome of the negotiations. “We have come to a great document…Obviously, both sides wanted to gain more, but the premise of negotiation is to arrive at a mutual understanding we all can work with. I am happy for my clients as they now have a document they can work with. I’m looking forward to making sure that this document can be implemented in a fair and just way for all.”

A new element in the CLA is the implementation of a performance appraisal system. To this effect Consultancy KPMG will be meeting with the entire Stuco staff within short.

Brandon said the system has all the mechanisms in place to safeguard everyone. “It is a fair evaluation system. It is open, clear and concise, so that it cannot be played with. It has everything in place in case the employee does not agree with the performance appraisal,” she said.