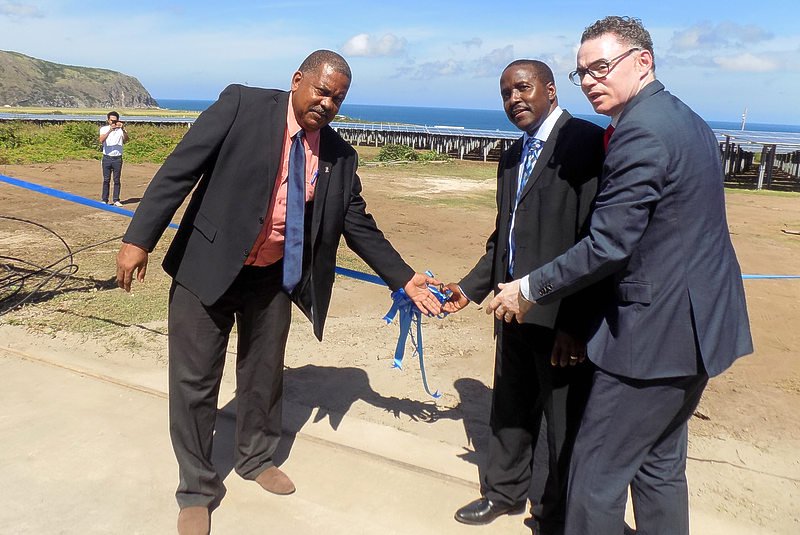 With more than13,000 solar panels installed, the solar park can generate 4.1 megawatts in solar power which can be stored in more than 850 batteries with a capacity of 5.9 megawatts.

On most days, the diesel engines at the power plant will be automatically switched off at around 9:00am until sometime between 6:00 and 7:00 in the evening, Cuvalay said.

The solar park also functions as one big Uninterruptable Power Supply (UPS) for the entire island. Should at night the diesel generators at the power plant fall off-line completely, the solar park will instantaneously respond to avoid a blackout.

This function was tested during the height of the evening load around 8:05pm, “and the lights did not even blink,” Cuvalay said.

Many solar parks in the region were devastated by Hurricanes Irma and Maria, but Statia’s solar park withstood the storm without a blemish.

“With the completion of our phase-two solar project, a structural deficit to the electricity operations of Stuco can now become a structural stable operation. For this, I wish to thank the Ministry of Economic Affairs for seeking a durable solution to the significant loss of operations of Stuco, and by provisioning the funds for phase-one and phase-two,” Stuco’s CEO said.

To lead sub-contractor SMA Sunbelt, he said, “I wish to tip my hat off to their competent, professional, knowledgeable driving force, project manager Wiebke Krueger…Having worked with this lady for the past three plus years has made me truly recognize and appreciate that women can have a firm place in the technical-engineering sphere, he said.

Cuvalay also commended the local contractors in the execution of the projects and recognized the contribution by all Stuco employees.

He said with its state-of-the-art solar park Stuco has become a “pacemaker and trendsetter” in the world of technology.

Dutch Government Representative Gilbert Isabella opened the park by saying that Statia made history in solar-energy production, not only within the Dutch Caribbean, the wider Caribbean region, but also within the Kingdom of the Netherlands.

“We are standing in the second largest solar park of the Netherlands. The National Government has invested over US $14 million in this park…The project is a great technological achievement. Futurists worldwide speculate about systems like this, but on Statia it is daily practice,” Isabella said.

Director of Stuco’s Supervisory Board Jason Rogers said the company has a clean financial bill of health and is financially stable.