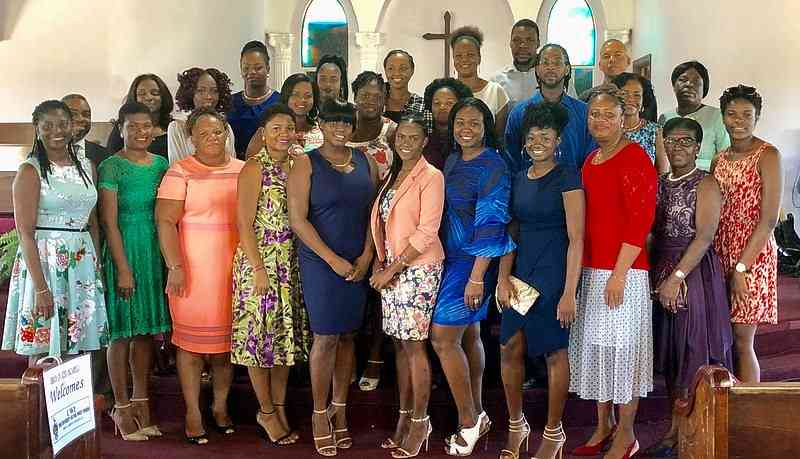 Some of the students, alumni and staff at the 70th Anniversary service.

ANGUILLA–A large cross-section of past and present students, faculty and staff of the University of the West Indies (UWI) attended the Church of God of Holiness in Pope Hill on Sunday, January 21, to participate in a special Service of Thanksgiving. The Service, which was conducted by Pastor Philip Gumbs, marked the launch of the celebrations for the 70th Anniversary of the University and the 2018 Student Guild Fest activities.

UWI Open Campus Council Member and President of Anguilla Chapter of the UWI Alumni Association, Stanley Reid read the scripture lesson, while Manager for the UWI Open Campus British Overseas Territories Dr. Phyllis Fleming-Banks brought greetings on behalf of the University. In thanking Pastor Philip and his congregation for hosting them, she noted that as their “neighbourhood church” the Church of God of Holiness was the fitting place of worship for the Thanksgiving Service.

The Service of Thanksgiving was part of a year-long number of activities being conducted throughout the region to mark the UWI’s 70th Anniversary and the 10th Anniversary of the Open Campus. The regional celebrations began with a special launch message from Vice Chancellor, Professor Hilary Beckles on January 3, and an Interfaith Service of Thanksgiving at the UWI Chapel on the Mona Campus on January 7. Activities on Anguilla will continue with the Student Guild Fest which include “I am UWI Day” on January 23 and the Student Guild Awards on January 24. Other planned events include an Alumni Awards Banquet to recognise the pioneering UWI graduates in Anguilla and a debate.