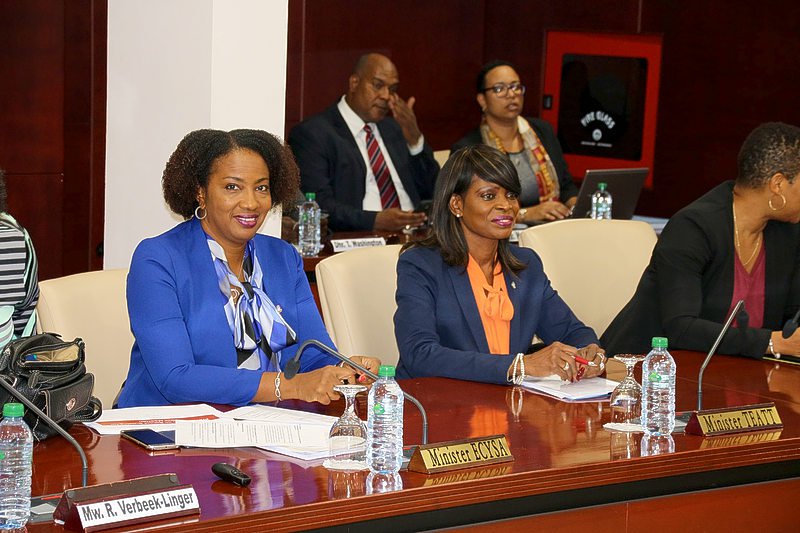 PHILIPSBURG–The findings of a Government Accounting Bureau SOAB study on the school busing sector in 2007 revealed that Government had overpaid buses by NAf. 1 million from 2003 to 2006 and that fraud had been committed in the billing for services.

In the meantime, Government’s cost to fuel the sector has increased from NAf. 3.6 million in 2002 to more than NAf. 5.4 million in 2015, Education Minister Silveria Jacobs said in a public plenary session of Parliament on school busing on Thursday.

There are currently 66 school buses operating in St. Maarten and 36 school bus operators serving 16 zones and 26 routes with an average of three routes per bus.

Jacobs said a total of three studies had been conducted on the sector – two in 2003 and one in 2007 – to assess its functioning. She said no action had been taken on the findings or on the recommendations made for regulation at the time. The study was commissioned by the Ministry of Tourism, Economic Affairs, Transportation and Telecommunications (TEATT).

SOAB had recommended that Government comply with the accountability ordinance; have a public bidding, conduct an inventory of students transported to show actual numbers, put a physical controller on buses to determine whether declared trips occurred and have a collective labour agreement (CLA) signed between Government and school bus operators. Other recommendations included appointing a school busing committee and initiating a school busing policy.

Some efforts began in an attempt to start regulating the industry in 2013, when the TEATT and Education Ministries were collaborating and meetings were held with school bus operators, but this ground to a halt in 2014. The TEATT Minister at that time continued with an advice and implementation plan which was approved.

Meetings were held with internal stakeholders in 2015 and options were presented to regulate the sector. These were made available for approval.

Former Education Minister Rita Bourne-Gumbs informed her colleagues in TEATT and Finance in August 2015 of her intention to introduce a new policy. Jacobs said that when the new coalition Government took office in December 2015 it was presented with the signed and approved terms of reference and plan for the school busing sector from the previous Government.

Work on the terms of reference began earlier this year with information placed in the media informing the public about the issue. Jacobs said it was only at this point that she had realised that proper consultation had not been done in the past. The terms of reference then were placed on hold so that this could occur.

The TEATT and Education Ministries began to work together to streamline their policies as they had been working on separate policies. A committee was formed and tasked to come up with a joint policy to regulate school busing and provide an advice to finalise this.

The next step, Jacobs said, is to meet with school bus operators to discuss the issue, obtain their feedback and hopefully reach an agreement for the future of school busing in St. Maarten. She said she would like school busing to be safe, efficient, cost-effective and based on good governance, and follow rules of accountability.

Falling under the public transportation ordinance provides for effective control of school buses, amongst other things. School bus operators will be required to have valid and certified licences issued by the TEATT Ministry and the buses must be in safe operating condition, must meet inspection standards and must pass inspection before they are used to transport children.

Members of Parliament (MPs) expressed differing views about Government’s approach to the issue. The meeting was adjourned after the first round to give the Minister a chance to answer the questions posed by MPs. The meeting will resume when the answers are ready.