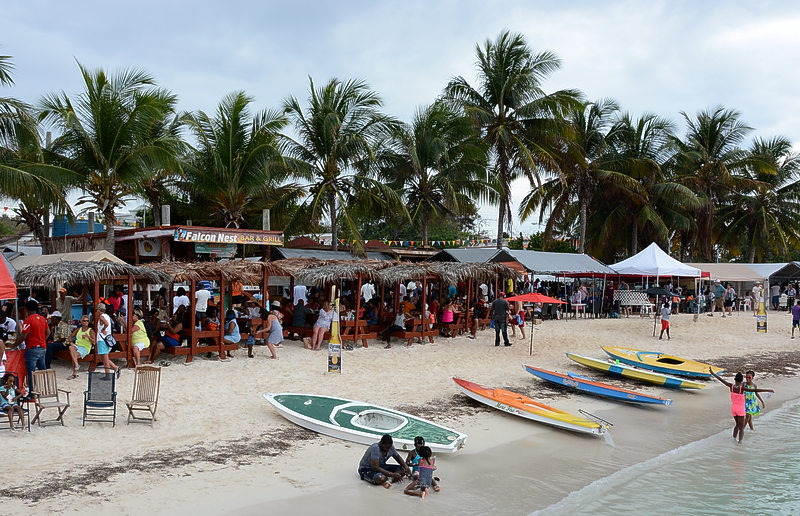 Booths along the beach front at Island Harbour during Festival del Mar.

ANGUILLA–The Festival del Mar, which took place over the Easter Weekend at Island Harbour, attracted a large number of residents and tourists to view the races, listen to the music and to sample the many fish dishes on sale at the booths along the beach. Results have come in from the various competitions held during the Festival.

Weighing the fish at the Festival del Mar competition.

In the model boat race the first place was won by Maroon Beast owned by Mathias Pemberton; second was I Got This, and third was Sky Blue owned by Peter Webster. In the Sunfish race Mathias placed first followed by Klaron Rogers and Kemany Gumbs. Bobby Delacour was the winner of the Kiddies Fishing competition as he caught the most fish.

Mathias also did well in the junior swimming competition placing first, with Taheim Carty second and Ozzie Harrigan third. The young swimmers swam from the shore out to a fishing vessel and back to shore. In the Senior Swimming relay, Mathias Pemberton and Nelson Fabian won first place having swum to Scilly Cay and the partner swam back to shore. Fourteen-year-old Michael Vanner from New York was second swimming both laps, and Reginald Oliver third also swimming both laps.

Due to the weather none of the scheduled boat races took place; they will be rescheduled for a later date.