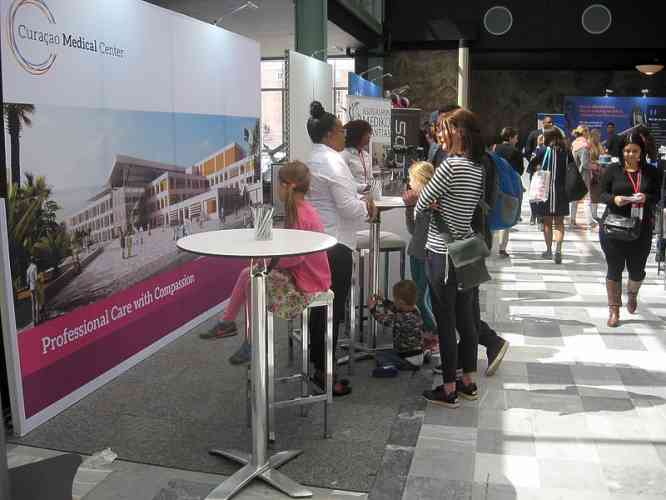 The Curaçao Medical Centre booth attracted a large number of visitors interested in working at the new hospital once it opens.

ROTTERDAM–The FRED Recruitment Expo took place in Rotterdam over the weekend and had much to offer for persons of Dutch Caribbean descent who are interested in finding a job “back home” cooking for patients and personnel of a hospital, or cooking for guests of a vacation resort, as a medical specialist or nurse in Curaçao, Aruba or St. Maarten, or working as an IT specialist, an auditor or a lawyer.

The 30 booth-holders had a large selection of jobs on the islands. The majority concerned vacancies in the three Dutch Caribbean countries. The recruitment exposition, which took place at the Rotterdam World Trade Centre (WTC), drew a large number of students and young professionals from or with an affiliation to the islands. FRED is held every year, and attracts more people every year.

St. Maarten Medical Center (SMMC) used its presence at FRED to get in touch with medical students. “It is good to listen to their expectations,” said SMMC Medical Director Felix Holiday. The hospital has numerous vacancies and that number is expected to further grow in the near future. “We anticipate another 80 new positions in the next four years. The SMMC is a dynamic organisation,” said Holiday.

Unlike the SMMC, the still-to-be-opened Curaçao Medical Centre (CMC) does not have a description of the vacancies as yet. First, there needs to be an agreement with the personnel of the current St. Elisabeth Hospital, said Human Resources Director Jan Willem van der Wal, who expected vacancies at all departments.

According to Van der Wal, many of the positions can be filled with personnel found in Curaçao, but for a number of vacancies, CMC will have to recruit in the Netherlands. At the FRED, CMC promoted itself as a new, hypermodern workplace.

Corendon Beach Resort in Curaçao, still under construction, was present to prepare for recruitment of personnel later this year by collecting phone numbers and email addresses of prospective candidates. “In this manner we will have the information on people who are interested in working with us once we start recruiting,” said Corendon Resort representative Carmen Rodriguez. Corendon will need to fill about 400 vacancies.

Aruban telecommunications company Setar is looking for network engineers, data marketeers and experts in the area of information technology (IT) and security.

Damen Ship Repair in Curaçao used FRED to promote several vacancies on MBO and HBO school levels. “It is important to make contact with future employees, because once they have graduated, it will be too late,” said Human Resources Manager Jurgen Rodrigues.